No. 13 Wisconsin to resume season after 2 weeks at Michigan

Wisconsin is set to play for the first time in three weeks, trying to pick up where it left off in a 45-7 win over Illinois. The Badgers’ previous two games were canceled due to a COVID-19 outbreak. Wisconsin is hoping to stay healthy and undefeated to possibly earn a spot in the College Football Playoff. Jim Harbaugh has another opportunity to lead Michigan to its first upset win with him as a coach. Harbaugh is 0-10 as an underdog with the Wolverines. Michigan is in danger of starting 1-3 for the first time since 1967.

QB Graham Mertz vs. Michigan’s shaky secondary: In the opener, the Badgers’ redshirt freshman became the third player in major college football over the last 25 years to throw for five-plus touchdowns and complete at least 95% of his passes in game. The Wolverines allowed their last two opponents to throw for six TDs and to have 323 and 342 yards passing. Michigan ranks 13th in the Big Ten and 104th in the country against the pass.

Wisconsin: Junior TE Jake Ferguson. He caught three TD passes in the opener and may have another big day against a secondary that allowed the last two opponents to each throw for three scores.

Michigan: Sophomore DB Daxton Hill. He has had seven tackles in each of the last two games. Hill appears to be the most talented player on a defense that desperately needs him to play like a star. 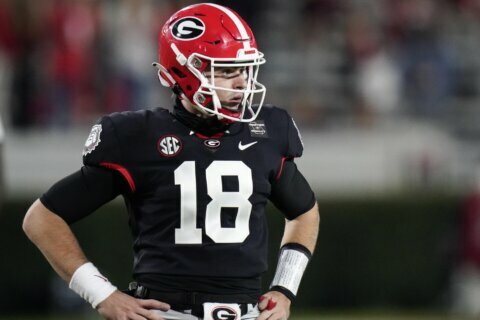