Maryland gets first win against Penn State in 5 years, 35-19

UNIVERSITY PARK, Pa. (AP) — Maryland coach Mike Locksley grew up rooting for the team he now coaches, so he’s intimately aware of all the beatings the Terps have taken year after year from Penn State.

Knowing that makes performances like the one Taulia Tagovailoa and the Terps turned in during their 35-19 win over regional rival Penn State on Saturday all that more special.

Tagovailoa competed 18 of 26 passes for 282 yards and three touchdown passes.

Rakim Jarrett caught five passes for 144 yards with a pair of touchdowns, Dontay Demus caught another and Jake Funk added 80 rushing yards and a score for the Terps (2-1, 2-1 Big Ten Conference), who won for just the third time in the 44-game series and first since 2015.

“Great team win,” Locksley said. “I’m just so happy for those players in that locker room. I’m happy for the former Terp football players that have endured us not playing competitively with (Penn State).”

The Nittany Lions have outscored Maryland 163-6 over the last three meetings.

Sean Clifford completed 27 of 57 passes for 340 yards with two interceptions and three touchdowns for Penn State, which fell to 0-3 for the first time since 2001.

The Terps flipped the script this time thanks to Tagovailoa and a defense that tortured Penn State all night.

A week after he turned in one of the best passing performances in Terrapins history, Tagovailoa didn’t hesitate to attack Penn State’s reeling defense. He completed 14 of his first 19 throws, including a pair of long touchdowns to Rakim Jarrett on two first-quarter possessions that gave the Terps a lead they wouldn’t relinquish.

“I feel like our whole offense, as well as our defense too, I feel like we’re all finding our rhythm,” Tagovailoa said.

Tagovailoa hit Jarrett on a short slant route and the wideout outran Penn State’s defense 42 yards into the end zone to open the scoring. Maryland went back to the play as the first quarter drew to a close, but this time Jarrett went 62 yards untouched to put Maryland up 14-0.

Funk capped an 8-play, 62-yard drive with a 38-yard touchdown run through heavy traffic early in the second quarter before Clifford cut the lead to 21-7 with a 20-yard touchdown to Dotson.

Tagovailoa gave Maryland a 28-7 lead when he found Demus running uncovered down the sideline for a 34-yard score.

It got worse for Penn State. Maryland got the game’s first turnover to start the third quarter.

Nick Cross blasted Clifford and jarred the ball loose on Penn State’s first second-half possession. Linebacker Chance Campbell scooped up the fumble and returned it 44 yards to give Maryland a 35-7 lead.

Clifford threw a pair of touchdown passes to Parker Washington in the fourth quarter.

Maryland: The Terps played their most complete game against their regional rivals in a long time. Tagovailoa appears to have all the makings of a star and helped Maryland’s offense dictate this game from the opening whistle.

Penn State: For the third straight week, the Nittany Lions have little to feel good about. They were gashed on the ground early, burned on third down regularly, gave up huge chunks on intermediate passing plays and couldn’t get anything going on offense.

Maryland’s defensive backs kept Penn State’s best players grounded, especially in the first half. Clifford targeted Dotson and Pat Freiermuth 12 times in the first half where they finished with just four catches for 63 yards and a score.

Maryland’s secondary made it tough when Clifford was on, too. The Terps finished with six pass breakups and two interceptions, often fighting for 50-50 balls in the process.

Locksley said he texted Jarrett earlier in the day at the team hotel to get him fired up for the game.

His message? Games like these were why the Terps recruited the speedy true freshman wideout who finished with a career-best day.

“He believes in his ability,” Locksley said. “He did his part to lift our team today.” 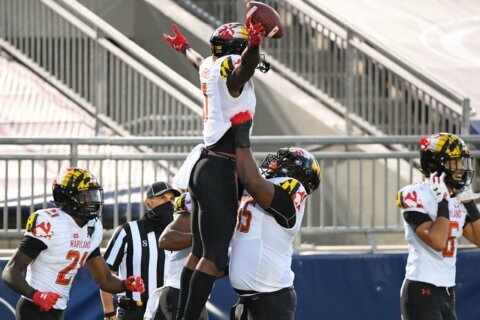