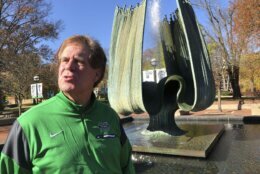 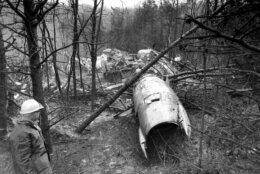 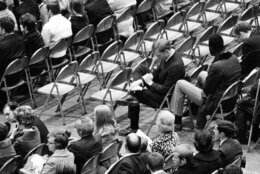 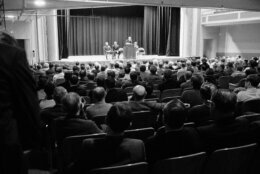 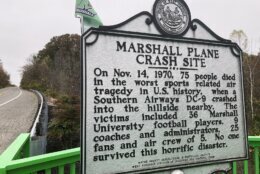 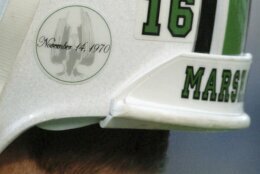 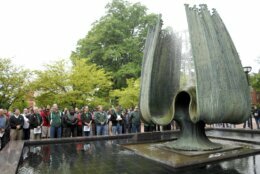 HUNTINGTON, W.Va. (AP) — After a plane crash killed most of Marshall University’s football team in 1970, school administrators could have resorted to the simplest choice — dropping the losing sport altogether.

They didn’t. They couldn’t bring themselves to do it.

From the 75 lives lost in the worst sports disaster in U.S. history, the program slowly rebuilt and eventually triumphed. A half-century later, those who lived through the tragedy — some by happenstance, others by fateful decisions that seemed mundane at the time — marvel as they recall the feeling that they had to keep playing.

“We felt the guys would want us to go on,” said Ed Carter, a sophomore offensive lineman who was supposed to be on the team plane but wasn’t. “We just felt we needed to continue the program.”

The team’s long, determined crawl back to success was chronicled in the 2006 movie “We Are Marshall ” — a title borrowed from the chants that resonate at Thundering Herd games. Today the team is undefeated and ranked No. 16 heading into Saturday’s home game with Middle Tennessee.

“It has been real special to see how that program has been turned around.” Carter said.

In the first season after the crash, Marshall won just two games. The first winning season didn’t come for another 13 years. Then success occurred in streaks.

Marshall captured Division I-AA national championships in 1992 and 1996 and amassed the most wins of any team in the nation in the 1990s, many of them during a step up into Division I-A under coach Bob Pruett. An athlete named Randy Moss started a journey there that would redefine what was possible in terms of speed, power and size at the wide receiver position.

The success continues now in the Bowl Subdivision under coach Doc Holliday, who is 6-1 in bowl games and won a Conference USA championship in 2014.

The plane crash redefined comebacks and helped shape the identity of the public university that serves 13,000 students in Huntington.

“It’s who we are,” said athletic director Mike Hamrick, who played linebacker from 1976 to 1979. “There’s not been a comeback story like Marshall football.”

Marshall’s chartered DC-9 was returning from a game at East Carolina on Nov. 14, 1970, when it slammed into a hillside in rain and fog just short of the Huntington airport runway. The jet burst into flames, leaving a charred swath of trees. Investigators concluded that the plane was flying too low, either because of faulty altitude equipment or the pilots’ failure to read their instruments properly.

Everyone on board perished: 36 football players, 39 coaches, school administrators, community leaders, boosters and the flight crew.

It happened a month after a plane carrying the Wichita State football team crashed in Colorado, killing 31 people, including 14 players. The Shockers football program was discontinued in 1986.

Those not on the Marshall plane have spent the last five decades dealing with heartache, self-doubt and unanswerable questions about why they were spared.

Three players — linebacker Dennis Foley and linemen Carter and Pete Naputano — were among the living but were mistakenly listed with the victims in newspaper obituaries and hometown tributes.

Foley, who was sitting out the 1970 season after hurting an ankle playing summer basketball, was one of several injured players who stayed in Huntington.

After a failed attempt to reach the crash site, he returned to campus. His roommate, kicker Marcelo Lajterman, was among the dead. That night, Foley was introduced to another student who would become his wife.

Carter had visited Texas for his father’s funeral. His mother asked him to stay a few days, and Carter obliged, missing the East Carolina trip. And yet his name remained on the passenger list. A friend who saw Carter back on campus panicked and ran screaming. He ran after her to prove he wasn’t a ghost.

A few other injured players were told at the last minute that school boosters would take their place on the plane. Cornerback and co-captain Nate Ruffin, who died of leukemia in 2001, never learned who took his seat.

“To this date, we didn’t know — nor did we care to find out — who got added to the trip,” Ruffin told The Associated Press in a 2000 interview.

Instead, the players who were left behind were called upon to identify crash victims through clothing, jewelry, shoes — even scars. Ruffin became an impromptu team spokesman, answering frantic queries from players’ parents.

There were too many funerals to attend. Six players whose bodies were never identified were buried at a nearby cemetery.

A pall of grief and skepticism hung over a program, which had a perennial losing record in the 1960s and had been placed on NCAA probation for recruiting violations in 1969. But acting university President Donald Dedmon and others quickly decided to keep football going.

Jack Lengyel, the coach hired in 1971 to usher Marshall into a new era, said the decision was “based on faith.”

They started from scratch. A ragtag group that included three dozen walk-ons, former servicemen, a soccer player, basketball players and transfer students joined the few returning athletes who were not on the plane. Some returning freshmen who were not allowed to play the previous fall due to NCAA restrictions helped fill out the team.

Ten months after the crash, in the second game of the following season, in what is still considered the biggest victory in program history, Marshall defeated Xavier, 15-13, at home by scoring a touchdown on the final play. Freshman fullback Terry Gardner caught a screen pass from Reggie Oliver and went 13 yards for the score.

Fans stormed the field in celebration.

Lengyel, now 86, gives talks to residents of the Maryland senior facility where he lives after showings of the film in which he is portrayed by Matthew McConaughey.

“The Marshall people are like a fist,” Lengyel said. “They support their athletic programs, and they always did. In the time of tragedy, they came together like a fist. They believed in the program and brought it from the ashes to the glory.”

A memorial fountain on Marshall’s campus is shaped like a tulip. Each rod represents one of the 75 crash victims. At a solemn ceremony every Nov. 14, the fountain is turned off. It’s turned back on every spring.

According to the university, sculptor Harry Bertoia said it was his wish that the fountain would “commemorate the living — rather than death — on the waters of life, rising, receding, surging so as to express upward growth, immortality and eternality.”

Like Foley, who met his wife amid the tragedy, Carter found purpose over the next five decades. Not religious at the time of the crash, he became a Christian. He’s preached the gospel for decades and started a ministry with his family in Chattanooga, Tennessee.

“A lot of people wondered why that (crash) happened to this day,” Carter said. “I don’t know. Why did the Lord leave me? I know that now.”

More than wins, losses at stake as basketball season arrives