MUNCIE, Ind. (AP) — Caleb Huntley had a career-high 204 yards rushing and three touchdowns, including a 1-yard score with 6 seconds to play, and Ball State rallied from a 14-point deficit to beat Eastern Michigan 38-31 on Wednesday night.

Quarterback Preston Hutchinson’s third touchdown run for the Eagles tied it a 31-all with 4:12 to play but Ball State (1-1, 1-1 Mid-American Conference) answered with an 11-play, 79-yard drive capped when Huntley scored on an off-tackle run.

Drew Plitt finished 22-of-31 passing for 232 yards and one touchdown with one interception for the Cardinals. Justin Hall had seven receptions for 55 yards, extending the longest active streak in FBS with a catch in his 38th consecutive game. The senior lead all active FBS players with 219 career receptions.

Hutchinson completed 17 of 29 passes for 250 yards and a score and added 17 carries for 103 yards Eastern Michigan (0-2, 0-2 Mid-American Conference). The junior went into the game with career totals of minus-23 yards rushing and three rushing TDs.

The Eagles led 21-7 midway through the second quarter and Chad Ryland’s career-long tying 52-yard field goal with 9:39 left in the third quarter made it 24-13. Huntley scored on a 13-yard run and Drew Plitt’s pass to Yo’Heinz Tyler for the 2-point conversion trimmed Ball State’s deficit to three points about five minutes later.

Tyler scored a 33-yard catch-and-run to gave Ball State its first lead at 28-24 with about 10 minutes to play.

Huntley, who finished with 34 carries, has scored 12 touchdowns in the last six games, dating to last season. 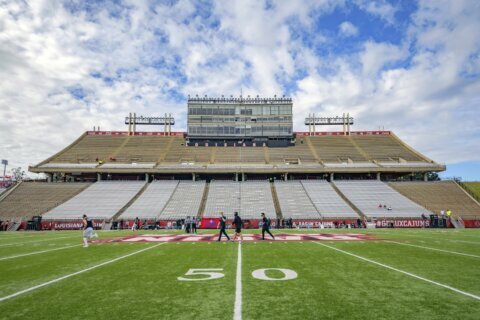