GAINESVILLE, Fla. (AP) — Kyle Trask has gone from Heisman hopeful to potential Heisman Trophy front-runner in two months, much of it coming in the last two weeks.

Trask threw for 356 yards and six touchdowns, extending his school record for consecutive games with at least four TDs to six, and No. 6 Florida overwhelmed Arkansas 63-35 on Saturday night in the Swamp.

Trask repeatedly torched the Razorbacks (3-4), who were without coach Sam Pittman and without much of a chance by halftime. It was the second time this season Trask tossed six TDs in a game. He’s the only player in school history to accomplish that feat.

“The more success teams have sometimes, the more individual awards come,” coach Dan Mullen said. “If we keep being successful as a team, we keep making plays, he’s going to have the opportunity to get individual awards.”

Arkansas quarterback Feleipe Franks, a three-year starter for the Gators (5-1), was booed early in his return to Florida Field and unable to do much to steal the spotlight from Trask. Florida players and coaches lined up to hug Franks after the game, and the home crowd responded with a warm ovation as he left the stadium for the last time.

“It’s awesome, man, just to be just to be around those guys and see the excitement they had to see me and me to see them,” Franks said. “It’s fun. You love the game, that’s what you play it for, the relationships you build along the way.”

Trask, meanwhile, started a new streak by throwing at least four TD passes in the first half for the second straight week. He had five in Florida’s first six drives and might have had another had the Gators not failed to convert a fourth-down play at the Arkansas 16.

Still, it was Trask’s most impressive half in two years as a starter and put him in elite company as the Gators won their 11th straight at home and moved a step closer to locking up a spot in the Southeastern Conference championship game.

“I think I did a great job of executing and being efficient,” said Trask, who now has an SEC-record 28 TD passes and just three interceptions in six games.

“You strive for perfection, but it’s really hard to get there,” Trask said.

The only negative for Florida: Its defense allowed a 47-yard TD pass, an 83-yard TD run and an 82-yard catch and run for another score.

He became the third player in school history with at least 25 touchdown passes in multiple years, joining Heisman Trophy winners Tim Tebow and Danny Wuerffel. Both of those guys have statues outside the stadium.

He also became the fourth in the Football Bowl Subdivision since 1996 to throw four or more TDs in six consecutive games in a single season. The list includes Colt Brennan (Hawaii, 9 in 2006), Graham Harrell (Texas Tech, 6 in 2007) and Logan Woodside (Toledo, 6 in 2016).

Trask had time in the pocket thanks to a complementary ground game and plenty of open options despite playing without dynamic tight end Kyle Pitts, who will miss another game following a concussion and nose surgery that stemmed from a viscous hit against Georgia.

Franks’ return may have had a little to do with it. Florida defenders wanted a piece of him and Trask surely wanted to prove Mullen made the right call by sticking with him over Franks.

Franks completed a 47-yard touchdown pass on his opening drive and pointed to the Florida sideline as he ran to celebrate with teammates. But he did little else the rest of the night and ended up in the locker room in the third quarter with a left hand/wrist injury.

He returned with it heavily tapped and wore a glove to help protect it. He could be seen looking into the stands, possibly reminiscing about his time in Gainesville, between the third and fourth quarters as the Gators played Tom Petty’s “I Won’t Back Down.”

Arkansas: The Razorbacks’ impressive start to the season took an ugly turn in Gainesville, but they could rebound with winnable games against LSU and Missouri next.

Florida: The Gators have the offense to beat anyone and the defense to keep everyone in games.

Arkansas: Is tentatively scheduled to host LSU next Saturday, but the Tigers are dealing with COVID-19 issues that prompted their game against No. 1 Alabama this weekend to be postponed. The Razorbacks have lost four straight against LSU.

Florida: Gets on an airplane for the first time since its travel-related COVID outbreak last month and faces Vanderbilt next Saturday. The Gators have won 28 of 29, including six in a row, in the series. 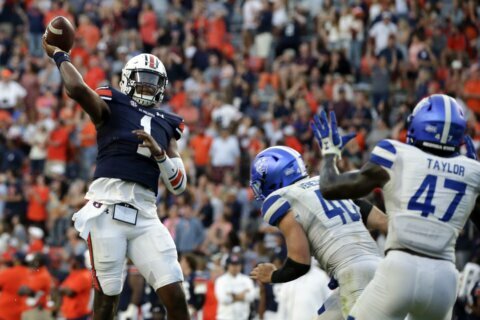