Bennett could lose Georgia starting QB job even if healthy

Quarterback Stetson Bennett’s status as No. 12 Georgia’s starter is uncertain even if he recovers from a shoulder injury in…
Listen now to WTOP News WTOP.com | Alexa | Google Home | WTOP App | 103.5 FM

Quarterback Stetson Bennett’s status as No. 12 Georgia’s starter is uncertain even if he recovers from a shoulder injury in time to play Saturday at Missouri.

Bennett has started the last five games, including last week’s 44-28 loss to No. 6 Florida that knocked the Bulldogs (4-2) out of the lead in the Southeastern Conference’s Eastern Division.

Bennett suffered an AC sprain in his right shoulder in the loss to the Gators. The injury could force Bennett to miss one or more games. Passing woes also threaten his starting job.

Coach Kirby Smart Monday wouldn’t say if the junior would keep the starting job even if Bennett is healthy.

Bennett completed only 5 of 16 passes for 78 yards with a touchdown and an interception against Florida. Smart said lack of accuracy was the biggest problem in the passing game.

Bennett threw three interceptions in Georgia’s 41-24 loss to No. 1 Alabama on Oct. 17. Smart gave D’Wan Mathis and Southern California transfer JT Daniels snaps with the first-team offense during an open week after the loss to Alabama but stuck with Stetson as the starter.

Mathis, Daniels and freshman Carson Beck will have renewed opportunities this week.

Smart said Daniels is moving better following his recovery from knee surgery which ended his 2019 season at USC.

Daniels’ knee prevented him from pushing Mathis and Bennett at the start of the season, but his potential to boost Georgia’s passing game could be his path to his long-awaited 2020 debut.

“JT’s got a good arm, there’s no doubt about that,” Smart said. “It’s one of the deals that he is getting better and better every day with mobility. You feel good that he is able to move around and do some things down there with us. Again, he’s going to get some reps with Stetson out, and we’ll find out where he is.”

Smart said Daniels volunteered to work on the scout-team offense so he could have more practice against Georgia’s first-team defense. Cornerback Eric Stokes said he has seen Daniels gain confidence in his knee.

“He’s just starting to believe in his knee,” Stokes said. “… I’m seeing his progress as far as picking up coverages and knowledge and all that stuff. ”

Mathis completed only 4 of 13 passes for 34 yards with two interceptions and one touchdown against Florida. Smart said Mathis must complete a higher percentage of passes.

“He’s got to improve that,” Smart said. “The number two thing is the management of the offense, in terms of play-call, communication, motion-shifts, snap-count, a lot of things in that nature, which he has improved on.”

The renewed questions about who will take snaps against Missouri come as former Georgia quarterback Justin Fields is thriving as a leading Heisman Trophy candidate at No. 3 Ohio State. Fields transferred in 2019 when Smart stuck with Jake Fromm as Georgia’s starter.

Fields didn’t want to wait for his opportunity at Georgia. Removing Fromm, who won 35 games in three seasons, from the starting job would have been an extremely difficult decision for Smart.

Georgia has a long list of injury woes, including at wide receiver. George Pickens missed the game with an undisclosed injury, and Marcus Rosemy-Jacksaint suffered a season-ending ankle injury after having a touchdown catch. Smart said Rosemy-Jacksaint had surgery on the ankle Monday morning and is expected to make a full recovery. 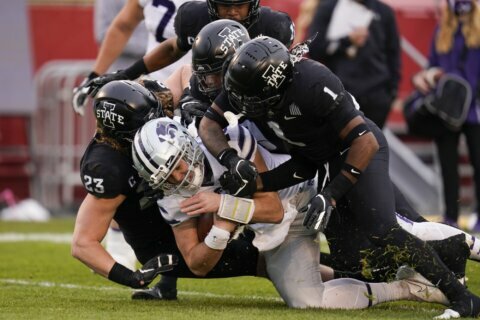