TUSCALOOSA, Ala. (AP) — Mac Jones passed for 417 yards and four touchdowns and No. 2 Alabama’s aerial assault picked apart No. 3 Georgia’s heralded defense in the second half of a 41-24 victory Saturday night.

The Crimson Tide (4-0), with coach Nick Saban stalking the sideline after a COVID-19 scare, rallied with three touchdowns in a 10-minute span starting late in the third quarter of a battle of the Southeastern Conference’s last remaining unbeatens.

The nation’s top scoring offense ultimately got the decisive upper hand in a battle with the Bulldogs (3-1) and one of the nation’s best defenses.

Smith caught 11 passes for 167 yards and two touchdowns, including one in the fourth quarter that effectively put it out of reach.

Then there was some old-school ground and pound, too. Harris gained 152 yards on 31 carries carries with a touchdown during that game-clinching span. He did it against the nation’s top run defense, which came in allowing 38 rushing yards and 12.3 points per game.

Stetson Bennett completed 18 of 40 passes for 269 yards and two touchdowns, including an 82-yarder to James Cook. But he threw three interceptions.

Alabama got a boost about seven hours before the game when the SEC cleared coach Saban to return to business of usual, determining a Wednesday COVID test was a false positive. He tested negative Thursday, Friday and Saturday.

The Tide has won the last six meetings with Georgia, including a 3-0 record against Saban’s former defensive coordinator, Kirby Smart. The first two came in the January 2018 national championship game and the SEC championship game the following season.

The Tigers (2-2 Southeastern Conference) had won eight straight in the series and jumped out to a 9-0 lead in the opening 10 minutes. But Bo Nix threw three interceptions and the Gamecocks (2-2) cashed in each time to win consecutive games for the first time in more than a year.

Shi Smith had eight catches, including a 10-yard TD grab midway through the third quarter that put South Carolina ahead for good, 20-19.

Auburn was driving on its following series when Nix threw his third interception — and second to cornerback Jaycee Horn who brought the ball down the left sidelines to the Tigers 8. Harris was in the end zone a play later for a 27-19 lead and Auburn could not recover.

The Tigers closed to 30-22 on Anders Carlson’s 22 yard field goal with 6:39 left. Auburn got the ball back once more with 2:15 left and drove to the South Carolina 13. Nix, though, was called for intentional grounding trying to avoid a sack and the Gamecocks held on to beat the Tigers for the first time since 1933.

ATLANTA (AP) — Trevor Lawrence brushed off his first interception of the season to pass for a career-high 404 yards and five touchdowns in Clemson’s romp over Georgia Tech.

Lawrence completed 24 of 32 passes. All of his scoring passes came in the Tigers’ dominant first half. Clemson led 52-7 at halftime and kept adding to the lead in the second, even with second- and third- (and maybe fourth-) stringers on the field.

Lawrence left the game after Clemson’s first possession of the second half.

It was Lawrence’s first interception since Oct. 19, 2019 at Louisville. North Carolina State’s Russell Wilson set the ACC record with 379 consecutive passes without an interception from 2018-19.

Williams ran 25 times and had his third 100-yard game of the season to help the Irish (4-0, 3-0 Atlantic Coast Conference) win their 22nd straight at Notre Dame Stadium.

It came against an inspired 3-4 Louisville defense that spent most of the afternoon on the field. Notre Dame controlled the clock for more than 36 minutes, including a game-ending 14-play drive that burned the final 7:55.

Travis guided an offensive that generated 434 yards for Florida State (2-3, 1-3 Atlantic Coast Conference), but was shut out in the second half.

North Carolina quarterback Sam Howell led three second-half touchdown drives to pull to 31-28, but the Tar Heels (3-1, 3-1) had drops on third and fourth down in the final seconds to end the comeback bid.

The Seminoles gave coach Mike Norvell a signature victory in his first season in Tallahassee following a shaky start that included a blowout loss at Miami.

Travis, a redshirt sophomore, completed 8 of 19 passes for 191 yards and ran 16 times for 107 yards as the Seminoles jumped out to a 31-7 halftime lead, the most dominating performance for the program in recent memory.

Texas A&M (3-1) led 14-0 at the half and had 325 yards of total offense in the game. Ainias Smith caught five passes for 20 yards and a touchdown. Chase Lane had a 51-yard touchdown reception in the opening minutes of the third quarter.

Bulldogs coach Mike Leach benched starting quarterback KJ Costello midway through the second half for freshman Will Rogers, same as he did last week in a 24-2 loss at Kentucky. Rogers connected with Malik Heath for a 15-yard touchdown pass in the fourth quarter.

Texas A&M’s defense continually disrupted the line of scrimmage, finishing with six sacks and eight tackles for loss. Mississippi State had minus-2 yards rushing and 217 yards of total offense.

Will Mallory caught two of King’s scoring passes and the Hurricanes (4-1, 3-1 Atlantic Coast Conference) bounced back from a 42-17 loss at top-ranked Clemson last week.

The Panthers (3-3, 2-3) lost their third straight and were without senior quarterback Kenny Pickett. He suffered an ankle injury against Boston College last week.

KNOXVILLE, Tenn. (AP) — Kelvin Joseph and Jami Davis returned interceptions for touchdowns in the first half and Kentucky shut out Tennessee in the second half.

It was Kentucky’s first victory in Neyland Stadium since 1984, the Wildcats’ largest margin of victory in Knoxville since 56-0 in 1893 and their most lopsided victory in the series since 1935.

After getting six interceptions and allowing only a safety against Mississippi State last week, Kentucky (2-2) picked off three passes against the Vols (2-2).

Joseph’s 41-yard touchdown and Davis’ 85-yard return — both off interceptions thrown by Jarrett Guarantano — helped put Kentucky up 17-0 in the second quarter.

With about 5 minutes left in the third quarter and trailing by 20, Tennessee went three-and-out for a second consecutive possession and was showered with boos from the sparse crowd of 22,519.

BLACKSBURG, Va. (AP) — Hendon Hooker ran for a career-high 164 yards and three touchdowns and threw for a score in Virginia Tech’s victory over Boston College.

Khalil Herbert added 143 yards rushing for the Hokies (3-1, 3-1 Atlantic Coast Conference). They ran for 350 yards in bouncing back from a road loss to North Carolina.

Virginia Tech scored off of four of BC’s five turnovers to pull away. The Eagles (3-2, 2-2) turned it over three times in the first half alone, with the most damaging coming when quarterback Phil Jurkovec overthrew an open Jaelen Gill deep in Virginia Tech territory. Devin Taylor intercepted the pass for the Hokies, and Hooker’s 29-yard touchdown pass to Herbert made it 17-7.

Boston College cut it to 17-14 on a touchdown pass from Jurkovec to Hunter Long with 7:11 left in the third quarter, but the Hokies scored the final 24 points – 17 of those off BC turnovers. 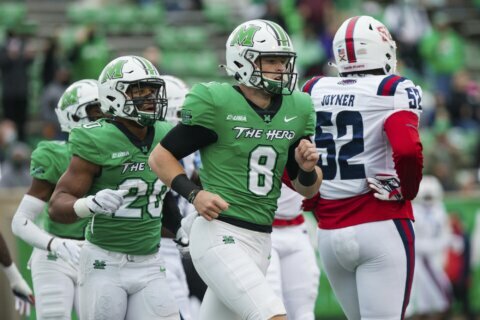