DALLAS (AP) — Benched early and celebrating late, Spencer Rattler had quite the first experience in a most unusual version of the Red River rivalry.

The Oklahoma freshman threw a 25-yard scoring pass to Drake Stoops in the fourth overtime and the Sooners survived a late rally from No. 22 Texas in regulation for a 53-45 victory Saturday.

Rattler sat most of the second quarter in favor of Tanner Mordecai after an interception and a fumble, but came back with two of his three scoring passes in overtime as the Sooners (2-2, 1-2 Big 12) bounced back from their first back-to-back losses in the regular season since 1999.

“I thought Spencer did some good things early then had a couple plays that I didn’t like,” coach Lincoln Riley said. “I felt like Tanner would go play well. I also felt like it would help Spencer step back for a second and kind of see the whole thing a little bit and settle down, and I think that happened.”

So much about one of college football’s most unique settings was different because the pandemic reduced the crowd to 24,000 at the 93,000-seat Cotton Bowl and shut down the surrounding Texas state fair for the first time since World War II.

The dramatic ending was quite familiar, even if it was the first time since 1999 that neither team was ranked in the Top 20. It was just the second four-OT game in 25 seasons of the Big 12, joining Kansas State’s 53-50 victory over Texas A&M in 2011.

Sam Ehlinger, who had a career-high four rushing touchdowns, threw two TD passes in the final 3:28 of regulation after what appeared to be a game-sealing interception by Woodi Washington in the end zone with the Sooners leading 31-17 with five minutes remaining.

But Ehlinger’s pass was intercepted in end zone by Tre Brown after Rattler’s toss to former OU coach Bob Stoops’ son, leaving the senior with a 1-4 record against his biggest rival, including a loss in the 2018 Big 12 championship game.

The Longhorns (2-2, 1-2) also left themselves little hope of playing for a Big 12 title, much less being part of the College Football Playoff conversation.

“We showed the football team we are there at the end when we stay out of our own way, without penalties, a lot of different things, mistakes that are self-inflicted,” said Ehlinger, who threw 53 passes and had 23 carries for a career-high 112 yards. “It’s unfortunate. We’ve got to get better.”

After tossing a 2-yard score to Keaontay Ingram with 14 seconds left in regulation, Ehlinger opened the second OT game in the Texas-OU series with his third rushing TD, from 3 yards.

Rattler answered with an 11-yard touchdown pass to Austin Stogner, then plunged over from the half-yard line on fourth down after his initial scoring run was overturned on review to start the second OT.

Rattler was replaced by Mordecai in the second quarter after losing a fumble on a sack at the Oklahoma 19 to set up the first Texas touchdown. His interception was thrown directly to waiting linebacker DeMarvion Overshown, who returned it to the Oklahoma 11. The Sooners held Texas to a field goal.

It was hard to tell if Rattler came out because of an injury or ineffectiveness. He was holding his helmet on the sideline, rubbing and shaking his right arm.

“I was kind of surprised when I came out at first,” said Rattler, who was tied for the Big 12 lead with four interceptions coming in. “Coach Riley told me to take a breather, you are going to get back in there. My arm was bugging me too.”

Consecutive Big 12 losses, the first for Oklahoma since 1998, sent the Sooners tumbling from No. 3 to out of the poll for the first time since 2016. They could get back in now. The Longhorns are likely on their way back out after a second straight loss.

Texas: The Longhorns squandered a great chance to take control early before scrambling to force the tie late. Ingram fumbled on his first carry at the Oklahoma 40, his second straight carry with a fumble. Ingram fumbled on the goal line a week earlier to help preserve TCU’s 33-31 win in Austin.

Despite the three early OU turnovers, the best Texas could do was a 10-10 tie, and they were behind again after getting a punt blocked.

Oklahoma: Riley never had to think much about replacing his quarterback the past three seasons, with Heisman Trophy winners and No. 1 overall NFL draft picks Baker Mayfield and Kyler Murray, followed by Jalen Hurts. But he didn’t hesitate with Rattler, saying Mordecai had been playing well in practice and deserved a look.

Mordecai’s only scoring drive wasn’t far, a 20-yarder after David Ugwoegbu blocked a punt and recovered it at the Texas 5. An unsportsmanlike penalty pushed the Sooners back. 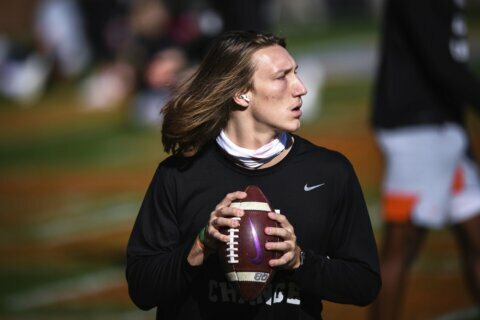 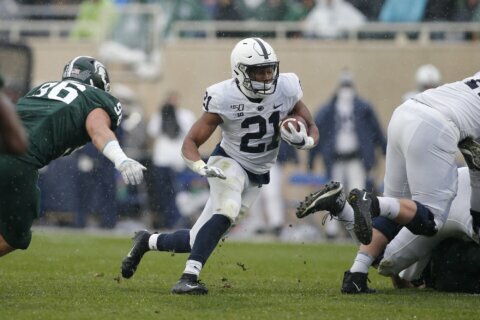 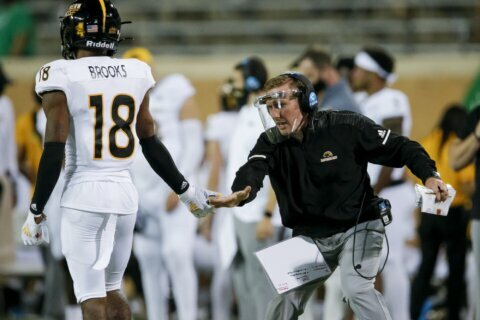