No. 5 Tar Heels look for 4-0 start in trip to Florida State

North Carolina is unbeaten and has its highest ranking in more than two decades, even as the fifth-ranked Tar Heels…
Listen now to WTOP News WTOP.com | Alexa | Google Home | WTOP App | 103.5 FM

North Carolina is unbeaten and has its highest ranking in more than two decades, even as the fifth-ranked Tar Heels have yet to have a strong performance from their offense and defense in the same game.

It’s the perfect scenario for coach Mack Brown entering Saturday night’s game at Florida State: a good start to build momentum, yet plenty to improve if the Tar Heels want to contend with No. 1 Clemson and No. 4 Notre Dame in the Atlantic Coast Conference race.

“Right now we’re a work in progress,” Brown said. “We’re getting better. The ranking is ahead of where we are I think, because we’re not consistently good enough right now on defense. The offense hasn’t shown the ability to do it every week. So we’ve got to do that.”

The Tar Heels (3-0, 3-0 ACC) are coming off a dominating offensive output against then-No. 19 Virginia Tech with 56 points and 656 yards. But that offense hadn’t been nearly as sharp in the first two wins against Syracuse and Boston College.

The defense led the way with seven sacks against the Orange and the clinching interception on the Eagles’ late 2-point conversion for the tie. But as the offense took off against Virginia Tech, the defense gave up 45 points and 495 yards with three starters down to injury.

That unit has also managed just one takeaway in three games, a point Brown repeatedly emphasizes. There’s an opportunity to improve against the Seminoles (1-3), who are 0-3 in the league for the first time since 2009 in their first season under Mike Norvell.

Florida State had three turnovers in each of their first two league games before having just one in last week’s loss to the Fighting Irish, the first of two straight games against top-5 opponents.

“We’ve got to come out and continue to improve, continue to get better,” Norvell said. “I’ve got a lot of confidence in what these guys can accomplish, but we need to be consistent in getting that done and go play our best game here this week.”

Some other things to know about Saturday night’s UNC-FSU game:

FSU redshirt sophomore Jordan Travis is set to get his second start at quarterback. He threw for 204 yards and a touchdown while running for 96 yards and another score in his first start against Notre Dame.

“There are a lot of things I have to correct,” Travis said. “I just have to trust my eyes and keep my footwork. That’s one thing that’s really important we’ve been emphasizing this week, is working on my footwork.”

North Carolina’s offense runs its best when running backs Michael Carter and Javonte Williams are moving the chains. The duo had career-best performances against the Hokies, with Carter (214 yards) and Williams (169) helping the Tar Heels finish with 399 yards on the ground for their best total against an ACC opponent since 1988.

The Tar Heels have scored a touchdown on their first drive in all three games, including their first two drives against BC and their first three against Virginia Tech.

“I like to get the ball and go ahead and set the tone,” UNC quarterback Sam Howell said.

All three opening drives have been at least 10 plays and 65 yards.

UNC and FSU must clean up their penalties.

Brown has won a national championship and is a College Football Hall of Fame member, but he’s never beaten his alma mater.

Brown lost three matchups with the Seminoles at Tulane during the 1980s and all six matchups during his first stint with the Tar Heels, the last in 1997. Coincidentally, that game was also the last time the program has played with a top-5 ranking. 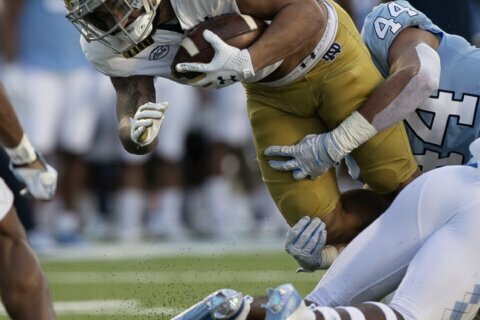 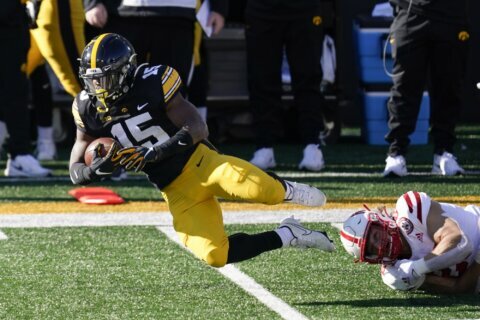 Hawkeyes’ defense comes up big in 26-20 win over Nebraska 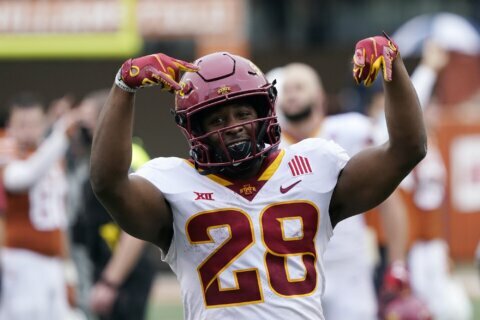