SOUTH BEND, Ind. (AP) — Fifth-ranked Notre Dame is embracing an “all in” mentality for the rest of its coronavirus-interrupted Atlantic Coast Conference season.

Coach Brian Kelly needs only to point to sophomore linebacker Jack Kiser as the perfect example of a player being ready if his number is called. Less than a week after working with the scout team, Kiser was awarded the game ball from Kelly following Notre Dame’s 52-0 victory over South Florida on Sept. 19.

“The reaction (in the post-game locker room) was pretty impressive — everyone was excited when he got the game ball,” Kelly said. “You know, it’s cliché-ish, but it’s next-man-in mentality … we know their preparation is going to be such that they are going to be ready to play.”

The 6-foot-1½, 221-pound Kiser is from tiny Royal Center, Indiana, little more than an hour’s drive from the Notre Dame campus. Defensive coordinator Clark Lea recruited Kiser and offered him a scholarship prior to his 2018 senior season at Class A power Pioneer, where he played quarterback and linebacker and twice led his team to state championships.

Against USD, he finished with a team-high seven solo stops among his eight total tackles, two of them for lost yardage and one quarterback hurry.

“To put on the helmet, walk down the staircase and then get on that field – it’s surreal,” Kiser said. “And then to actually take live snaps and contribute to the win, that’s amazing.”

Kelly said the Irish have players who “given the opportunity will ‘Wally Pipp’ you,” referencing the first baseman New York Yankees great Lou Gehrig replaced on his way to playing 2,130 consecutive games. “Happy for Jack and there will be other guys who get their opportunity and they’ll shine.”

Considering what has happened to Notre Dame since, it seems like Kiser’s performance happened months ago. The following Tuesday, the team suspended practice and its game at Wake Forest scheduled for Sept. 26 was pushed back to Dec. 12 amid a handful of positive COVID-19 tests.

Notre Dame later revealed that 273 COVID-19 tests administrated from Tuesday through Sunday of last week had produced 18 positive tests, bringing to 25 the number players in isolation together, with 14 more in quarantine — the total of 39 being a little more than one-third of Notre Dame’s roster of scholarship and non-scholarship players.

A day before the Irish resumed practice for its Oct. 10 home game against Florida State, Kelly told ESPN he suspected the outbreak was the result of the team having their pre-USF team meal together with a player who became ill on the sideline and was among those who tested positive.

Since the beginning of the fall semester, quarterback Ian Book has been socially distanced from his teammates and been taking his classes online. Kelly, who is hoping to have 90% of his team available to practice this Saturday, said the team will now have pre-game meals in large areas so the players can be socially distanced from one another and also have antigen tests available on the sideline during games.

“Just being vigilant and understanding that this thing can hide in so many different areas make it a tricky proposition, even if you’re doing all the right things,” Kelly added.

And just in case, it means having other players ready to go a few hours before kickoff, like Kiser and others were against South Florida.

“Yeah, it’s an ongoing process,” Kelly said following the win over USF asked when he might learn about depth chart changes. “During the week, or 2 in the morning, or 12:50 before kickoff … you just kind of roll with it, you know?” 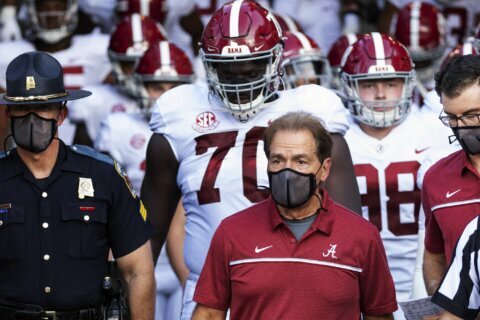