PITTSBURGH (AP) — North Carolina State head coach Dave Doeren kept waiting for quarterback Devin Leary to take a firm grasp of the starting job. Doeren knew Leary had all the tools necessary to provide some stability at a position where there’s been little of it recently for the Wolfpack.

At some point, Doeren figured it would all come together for the charismatic redshirt sophomore with the big arm.

That point arrived in the fourth quarter on Saturday at Heinz Field against No. 24 Pittsburgh. Twice the Wolfpack needed to go the length of the field to reclaim the lead. Twice they did it, the last time coming on a 13-yard strike from Leary to Emeka Emezie with 23 seconds to go to give N.C. State a stunning 30-29 victory over the previously unbeaten Panthers.

Leary, making his first start of the season, drove the Wolfpack 79 yards in 12 plays, the last a perfect back-shoulder throw to Emezie, who made a perfect spinning grab to give N.C. State its first victory over a ranked team since 2017. Leary finished 28 of 44 for 336 yards and four touchdowns as the Wolfpack (2-1, 2-1 Atlantic Coast Conference) bounced back from a dismal loss at Virginia Tech to stop Pitt’s bid for the program’s first 4-0 start since 2000.

“We’ve been waiting for him to become ‘The guy,’” Doeren said of Leary. “ We’ve always known what his arm was. This team believes in him. You can see it in the locker room. They rally around him.”

They ended up doing it three times. The Wolfpack ripped off 17 straight points in the first half to stagger the nation’s top-ranked defense then rolled up 151 yards over the final two drives. The game-winning score came two plays after Leary converted a fourth-and-9 with a dart to Thayer Thomas.

“Fourth down, no timeouts, it’s do or die at that point,” said Leary, who was slowed during camp after being forced to quarantine due to COVID-19 protocols. “You have to make a play. Honestly, that’s one of my favorite things to do, all the eyes are on me, the ball’s in my hand, and I have to make a play.”

Pitt’s 13th penalty of the day — a defensive holding call — on the next snap moved the ball to the Panther 13 and Leary and Emezie took care of the rest. A week after getting rolled by the Hokies, N.C. State responded with its first win over a ranked opponent since beating Louisville in 2017.

“A lot of people wanted to just throw us in the trash can after last week,” Doeren said. “That’s the world we’re in right now. These kids just hung together. The coaches hung together.”

Pitt senior quarterback Kenny Pickett threw for a career-high 411 yards and a touchdown and added two more on the ground, including a go-ahead score with 1:44 to play. Still, it wasn’t enough on a day the Panthers again struggled to get into the end zone.

Seven Pitt drives finished in N.C. State territory. They led to two touchdowns, three Alex Kessman field goals a punt and a turnover on downs when the Panthers failed to convert on four shots inside the N.C. State 5.

“We want to play like champions, we want to be champions at the end of the year and we didn’t play like that today,” Pitt center Jimmy Morrissey said.

N.C. State: The season’s first two weeks — an escape against Wake Forest and a dismal loss to the Hokies — provided little proof the Wolfpack had turned it around following a disappointing 4-8 mark in 2019. A road win over a team that considers itself an ACC contender should provide one.

Pitt: The defense is likely good enough to keep the Panthers in every game. The offense’s inability to get into the end zone regularly, however, will allow opponents to do the same. “We can point to all kinds of different things,” head coach Pat Narduzzi said. “But it starts and ends with me. Got to have them better prepared.”

The Panthers weren’t particularly pleased after they dropped from No. 21 to No. 24 last week when teams from the Big Ten were allowed to re-enter the rankings. There won’t be much discussion this time around.

N.C. State: Travels to Virginia next Saturday. The Wolfpack won the previous meeting between the schools 35-21 in 2018.

Pitt: Hits the road for the first time next weekend when the Panthers play at Boston College. The Eagles are quarterbacked by Pittsburgh native and Notre Dame transfer Phil Jurkovec. 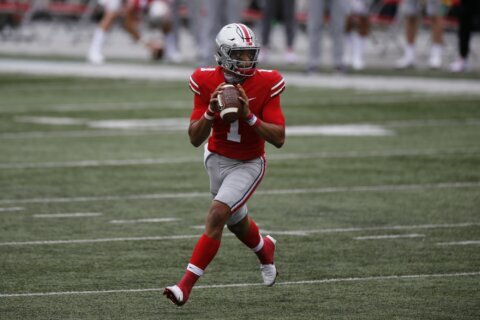