King has Canes on the rise as they prepare for No. 1 Clemson

MIAMI (AP) — Miami Hurricanes senior D’Eriq King has been chosen Atlantic Coast Conference quarterback of the week after each of his past two games.

Against top-ranked Clemson, he would happily settle for quarterback of the night.

The No. 7-ranked Hurricanes (3-0, 2-0 ACC) are two-touchdown underdogs Saturday at Clemson (3-0, 2-0), but they believe they can win in part because of King. He has thrown for 736 yards and run for 157 while directing an offense that is reminding Miami fans of the school’s glory days.

King now faces his toughest challenge since transferring from Houston in January: to outscore the high-powered Tigers and Trevor Lawrence.

“I’m not playing Trevor; our defense is playing him,” King said Wednesday. “But I’m excited to play in this game.”

This isn’t the first time King has gone against a marquee QB. He threw for two touchdowns and ran for one last season in Houston’s 49-31 loss to Oklahoma and Jalen Hurts.

“Playing Jalen last year was kind of similar to this,” King said. “It was a big game, a lot of headlines. But you’ve got to play like it’s any other game.”

King made 22 starts in Houston, and his maturity has been a stabilizing influence for the Hurricanes, whose unsettled quarterback situation contributed to a disappointing 6-7 record last year. He has helped Miami climb to its highest ranking since November 26, 2017.

Like Lawrence, King has yet to throw an interception.

“The great things about D’Eric is that being a guy who has played a lot of college football, he’s a mature kid,” offensive coordinator Rhett Lashlee said. “He’s got that experience, and that was a big advantage for us.

“He’s just a very consistent young man, the same kid every day. He’s a very loose, confident person, but he’s focused and locked in on what we’re doing. That is slowly but surely hopefully becoming the personality of our offense.”

Miami’s blocking has been much improved so far this year, but the line hasn’t face a front as formidable as Clemson’s, which could force King to throw more quickly and run more.

Like Lawrence, King poses a threat both as a passer and a runner. Tigers coach Dabo Swinney notes he’s averaging 5.4 yards after contact as a rusher.

“There’s nothing he can’t do,” Swinney said. “He can make all the throws, and when he runs it, he’s a running back — he’s got that mindset.”

In a big game, King said, it’s important not to try to do too much — even with Trevor Lawrence on the other side. Still, he acknowledged the opportunity the match-up presents.

King would happily settle for being No. 1 on Saturday. 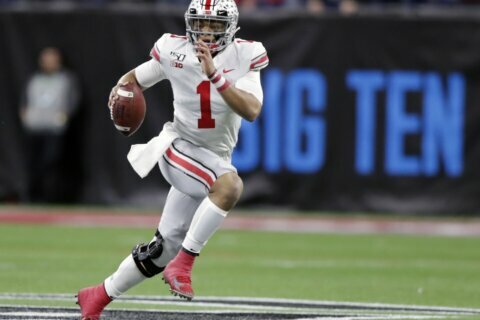