LAFAYETTE, La. (AP) — Massimo Biscardi made a 40-yard field goal with 4 seconds left to give Coastal Carolina a 30-27 victory over No. 21 Louisiana-Lafayette on Wednesday night in Sun Belt matchup of unbeaten teams.

Freshman Grayson McCall threw two touchdown passes and ran for a score to help the Chanticleers (4-0, 2-0) beat a ranked team for the first time. The 4-0 start is their first in FBS play.

“We’ve never been in this position before,” second-year Coastal Carolina coach Jamey Chadwell said. “For us to be able to come out with a victory, in a Wednesday night game on national television, there’s tons of excitement here.”

Coastal drove 60 yards in the final 5:30 to set up Biscardi, a three-year starter who has hit 31 of 39 field goal attempts. McCall had two completions for first downs on the drive and finished 17 of 24 for 202 yards. He has 11 TD passes in four games.

“I trusted my preparation, and I had teammates that believed in me,” Biscardi said. “I kind of blacked out, I didn’t even think to be honest. I just went down my lines and it went in.”

“Their quarterback played well, but we could have tackled better,” said Louisiana-Lafayette coach Billy Napier, whose team rallied from behind in each of its first three wins — the last against Georgia Southern on a last-play field goal. “They stress you on defense with everything they do, but we had our opportunities to get them stopped.”

Both teams scored on their first and their last possessions of the first half, with Levi Lewis’ 12-yard pass to Jalen Williams giving Louisiana a 7-0 lead before the Chanticleers matched that drive and CJ Marable scored from a yard out.

Coastal Carolina took a 13-7 lead with 1:03 left in the half when McCall capped an 84-yard march with a 13-yard scoring pass to Marable. The Cajuns drove 77 yards in 54 seconds, with Lewis scoring on a quarterback draw with 5 seconds left.

The second half started like the first, with both teams scoring on their first possession. McCall hit Jaivon Heiligh from 6 yards out to cap an eight-minute drive, and Lousiana countered in only seven plays on Mitchell’s 9-yard run late in the third quarter. One drive later, though, Lewis’ pass was picked off by Jordan Morris at the Louisiana 26, with the only turnover of the game setting up McCall’s 3-yard scoring run.

“Every time we scored, we felt like we had something going, but they came back and scored and we had to go and do it all over again,” Chadwell said. “The turnover was huge that our defense got, and it was a field position game in the fourth quarter. Fortunately, we were able to move the ball enough and Massimo knocked it in.”

Coastal Carolina: The nation’s fourth-highest scoring offense (44.7 points per game) didn’t match its point average, but the Chanticleers were efficient with 38:11 in time of possession and a 9 of 15 success rate on third down.

Louisiana-Lafayette: The Cajuns’ rushing attack accounted for 240 yards, but Lewis’ interception on the next-to-last play of the third quarter set up a Coastal Carolina’s go-ahead touchdown.

The Cajuns, who were one of only three Group of Five teams in the rankings, will likely drop out of the Top 25 poll. They may be replaced by the Chanticleers, who were seventh among teams receiving votes after getting poll votes for the first time in school history two weeks ago.

No. 3 Ohio State cancels game at Illinois after virus spike 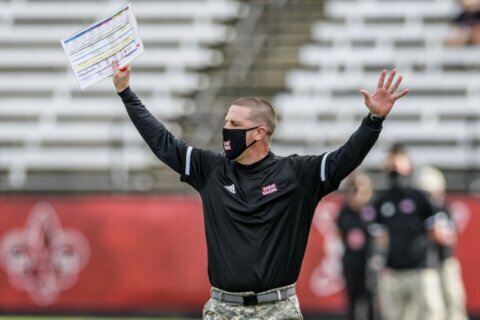