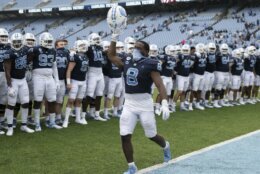 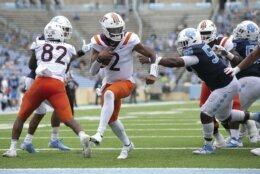 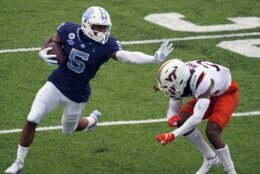 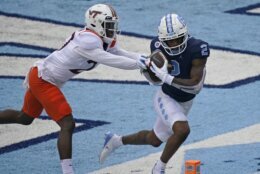 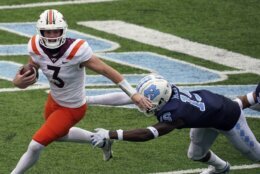 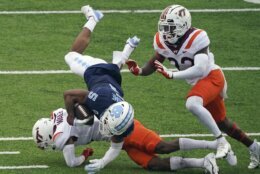 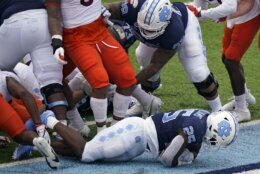 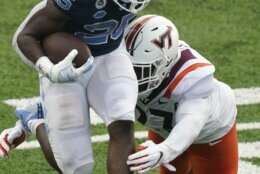 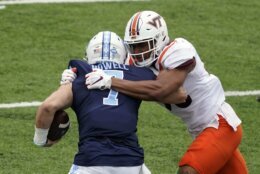 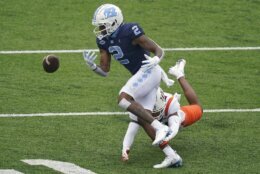 When it was over, the duo had powered the Tar Heels to their best rushing performance in nearly three decades while ending a four-year skid against No. 19 Virginia Tech.

Carter ran for a career-high 214 yards and two touchdowns — including a 62-yarder midway through the fourth quarter — to lead UNC past No. 19 Virginia Tech 56-45 on Saturday. Williams ran for a career-best 169 yards and two more scores, a combination that powered the Tar Heels to 399 rushing yards — their best output since 1993 and against an Atlantic Coast Conference opponent since 1988.

“Those are two of the best backs in the country,” Tar Heels coach Mack Brown said. “They’ve got balance, they’re fast, they’ve got the power and quickness to run inside, and the speed to run outside. They are two of our best weapons. And we know that.”

UNC (3-0, 3-0 ACC) said it was the first time in program history that the Tar Heels had two players crack the 160-yard mark in the same game.

Throw in Sam Howell’s three touchdown passes, and UNC finished with its highest scoring output ever against the Hokies along with 656 total yards — the No. 2 total ever posted against Virginia Tech’s defense, which was severely depleted in the secondary.

Khalil Herbert ran for 138 yards and two touchdowns for Virginia Tech (2-1, 2-1), which again played shorthanded due to coronavirus and injury issues. The Hokies rallied from a 42-17 third-quarter deficit to make it a one-possession game entering the fourth quarter, but no closer.

“North Carolina’s explosive on offense,” Virginia Tech coach Justin Fuente said. “If you can’t fit the run game, you’re at their mercy. They can do whatever they want.”

Virginia Tech: The Hokies have gone from being down 23 players and two full-time coaches against North Carolina State, to 21 players and two coaches against Duke, and then 15 players Saturday. The Hokies had their best surge with a third-quarter run of 20 straight points — fueled by an onside-kick recovery — to pull within 42-37. But the defense gave up way too many big plays as Fuente had to piece together a secondary with few options at safety.

“It came down to we were drawing stuff up in order to get people in the game,” Fuente said. “I’ve never been a part of anything like it in terms of having no safeties. We were better at corner, health-wise this week. Some of those guys hadn’t practiced.”

UNC: The Tar Heels had won five straight games dating to last year, with four straight lopsided margins followed by a close win at Boston College last weekend. They looked on their way to another blowout by taking 21-0 and 35-14 leads despite being down three defensive starters. Things got closer, but the Tar Heels rolled with an offense that looked equally as prolific whether throwing or running.

The Tar Heels turned in an impressive performance much of the way that could inch them up in the AP Top 25, while the Hokies could slide after trailing the entire way.

Hendon Hooker, a returning starting quarterback who had yet to play this year, threw for two scores and ran for another. He took over fully for Braxton Burmeister after halftime.

“He just came in and gave us a spark,” said tight end James Mitchell, who had a 26-yard scoring catch from Hooker.

UNC’s four-game skid in the series included last year’s six-overtime road loss in the longest game in ACC history, as well as the Hokies’ comeback win here in 2018 on a final-minute touchdown.

That was set up by Carter’s critical fourth-quarter fumble at the goal line — the ball shot about 10 yards straight up in the air on a jarring hit — as he tried to give UNC a two-possession lead.

“It felt like it was all my fault,” Carter said of the 2018 fumble, saying Saturday’s win “just kind of let that go to bed, that feeling go to rest.”

(SOME) FANS ARE BACK

This was UNC’s first home game since Gov. Roy Cooper announced the state would ease public -gathering restrictions related to the pandemic by allowing schools to fill 7% of their stadium capacity for fans. That cleared the way for up to 3,535 fans scattered about the 50,500-seat Kenan Stadium.

“It actually felt like a real football game today,” Howell said, “and I really couldn’t say that about the first two games.”