Austin Peay announced Tuesday that Walden would fill a vacancy that has been open since July, when Mark Hudspeth abruptly resigned.

Walden’s departure means Southern Miss will be on its third head coach of the season.

He was promoted from offensive coordinator just days after Jay Hopson resigned following a season-opening loss to South Alabama for the Golden Eagles.

“We are excited for Scotty and his family as they begin this new journey and we wish them nothing but the best,” Southern Miss athletic director Jeremy McClain said.

Last week ago, the 30-year-old Walden tested positive for COVID-19 and was forced to miss Southern Mississippi’s game on Saturday against Liberty. Assistant head coach Tim Billings, who filled in for Walden in the 56-35 loss, was named interim coach for Southern Miss.

The Golden Eagles are 1-4 and have had two games postponed because of COVID-19 issues.

Walden will lead them into the scheduled spring season in the Ohio Valley Conference, which starts Feb. 21. He will be the youngest Division I head coach in the country.

“Scotty is a new-age CEO for a new era of college football,” Austin Peay AD Gerald Harrison said. “He is a tireless worker, a motivator, a dogged recruiter, and a person who possesses an infectious personality that will lead us back to the OVC championship and beyond.” 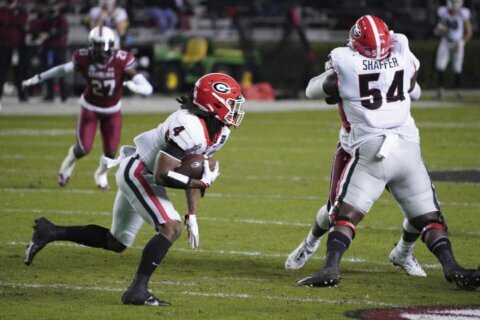 No. 13 Georgia runs all over South Carolina in 45-16 victory