West Virginia coach Neal Brown has a soft spot for teams from his native Kentucky, keeping his comments positive for an upcoming opponent that did little right in its opening game.

Besides, Eastern Kentucky is his mother’s alma mater.

The Mountaineers start the coronavirus-delayed season Saturday in its only nonconference game against the Colonels, who managed just 166 total yards in a 59-0 loss at Marshall last week.

Wells was an assistant under Roy Kidd, who won two Division I-AA national championships and was runner-up twice.

“A lot of respect for them,” Brown said. “They had a tough game last week. I expect them to bounce back like most teams do between week one and week two. They’ll make adjustments and they’ll be much improved this week.”

Eastern Kentucky of the Championship Subdivision will get national television exposure for the second straight game. While thousands of fans were allowed into the stadium on a limited basis last week at Marshall, West Virginia is keeping its gates closed due to the virus.

Morgantown is one of the state’s coronavirus hotspots. The university this week brought an abrupt halt to in-person classes, moving nearly all undergraduate courses online temporarily after a recent uptick in virus cases, due in part to large student gatherings.

“I want our fans to understand that we’re going to miss them on Saturday,” Brown said. “It will not be the same. In a season of a lot of different things and things that are abnormal, that is going to be the most difficult challenge for our players.”

Some other things to know about the first-ever meeting between Mountaineers and the Colonels:

West Virginia had the Big 12’s worst offense a year ago and was near the bottom nationally in rushing, averaging just 73 yards per game. Brown didn’t mince words when asked whether his running game is improved.

Leddie Brown will get the start, backed up by Alec Sinkfield. They combined for 690 yards in 2019.

West Virginia sophomore cornerback Nicktroy Fortune missed nearly two weeks of practice time after the death of his mother. Brown said the coaching staff encouraged Fortune to be with his family. Fortune is listed as a starter on the depth chart.

West Virginia is wearing “BLM” helmet stickers in support of the Black Lives Matters movement. Football players last week participated in a peaceful campus walk for inclusion, equality and change after Jacob Blake, a Black man, was paralyzed after being shot in the back by a Kenosha, Wisconsin, police officer.

West Virginia players also participated in a march in June after George Floyd, a handcuffed Black man, died after a white police officer used his knee to pin Floyd to the ground in Minneapolis.

“Coach Brown proposed a question to us and said, ‘what can I do to create change?’” said senior wide receiver T.J. Simmons. “One thing that I wrote down was use my platform, use my voice, to spread the word and to educate people on things they might not know.”

Eastern Kentucky opted out of the Ohio Valley Conference’s move to possibly play in the spring. The Colonels have a fall slate of eight nonconference games. Last week they allowed Marshall redshirt freshman Grant Wells to throw for 307 yards and four touchdowns in his first start.

After Saturday, West Virginia will have a week off before the Big 12 opener at No. 15 Oklahoma State on Sept. 26. 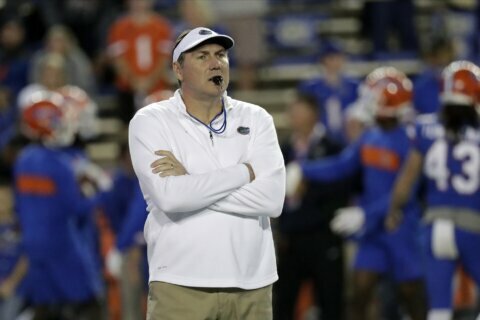