Mullen returns to Mississippi with No. 5 Florida, SEC hopes

No. 5 Florida at Ole Miss, Saturday at noon ET (ESPN).

Florida looks to get coach Dan Mullen’s third season, the most anticipated one yet, off to a good start in Oxford, Mississippi. The Gators have hopes of competing for the Southeastern Conference title. This is the first time since 1987 that Florida begins its season with a true road game. The Rebels are trying to get coach Lane Kiffin a program-changing upset in his debut.

Florida: The Kyle to Kyle connection. TE Kyle Pitts will be one of QB Kyle Trask’s favorite targets. Pitts had 54 receptions for 649 receiving yards and five touchdowns in 2019 while sharing the ball with future NFL WRs Van Jefferson, Freddie Swain, Josh Hammond and Tyrie Cleveland.

Ole Miss: QB Matt Corral is expected to get the start in Kiffin’s debut, with Plumlee sure to see playing time. Corral was once committed to Florida. He started four games last season and led the team with 1,362 yards passing, with six touchdowns and three interceptions.

This is the third consecutive season that Kiffin opened against a top-five team. Florida Atlantic lost at Ohio State 45-21 last year and at Oklahoma 63-14 in 2018. … Ole Miss’ last win over a ranked opponent came in 2017 – against Mullen in his final game with Mississippi State. … This is Florida’s first trip to Oxford since 2007, a 30-24 victory in which eventual Heisman Trophy winner Tim Tebow accounted for 427 yards and four touchdowns. 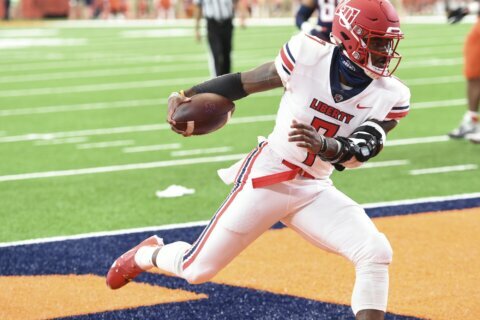