DENTON, Texas (AP) — Shane Buechele threw three of his four touchdown passes in the first quarter and SMU cruised to a 65-35 win over North Texas on Saturday night.

Buechele completed 24 of 33 passes for 344 yards with no interceptions and added a 2-yard touchdown run. The senior moved into fourth on SMU’s career list with seven 300-yard passing games and into fifth at the school with 39 career TD passes.

North Texas went three-and-out on the game’s opening possession and then on SMU’s first play from scrimmage Buechele hit Rashee Rice for a 50-yard gain. Three plays later Reggie Roberson Jr.’s 15-yard touchdown catch made it 7-0 with 12:33 less than 2 1/2 minutes into the game. Buechele hit Danny Gray for a 62-yard touchdown about three minutes later and Kylen Granson’s 7-yard scoring reception gave the Mustangs a 21-0 lead with 3:27 left in the quarter.

Roberson finished with nine receptions for 103 yards and Rice had five catches for 102 yards. 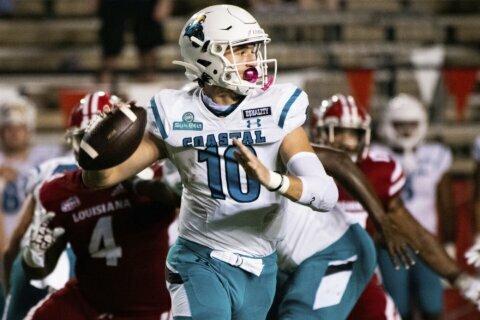