UNDATED (AP) — Hockey became the latest sport to finalize a return during a global pandemic after NHL owners and players approved an agreement Friday to resume the season — and with it an assurance of labor peace through September 2026.

Games are scheduled to begin Aug. 1 in Toronto and Edmonton, Alberta, with coronavirus cases in the U.S. pushing the league into Canada for the summer and fall until the Stanley Cup is awarded in late September or early October.

Training camps open across North America on Monday, which is also the deadline for players to opt out of participating with no penalty.

The return-to-play plan, tentatively approved by the NHL and NHL Players’ Association on Monday, was ratified by the league’s board of governors and with majority approval from players following a three-day voting period, ending Friday. Along with it, the two sides also formally approved a four-year extension of the collective bargaining agreement.

The NHL is back with an expanded 24-team playoff format, but things will be much different from the norm: There will be no fans. There will be between five and six games a day at the start — up to three at each site, which will be heavily cordoned off from the public.

Posey opts to skip the season

UNDATED (AP) — San Francisco Giants star catcher Buster Posey is the latest big-name player to skip this season because of concerns over the coronavirus. Posey says his family finalized the adoption of identical twin girls this week. The babies were born prematurely and Posey said after consultations with his wife and doctor he decided to opt out of the season.

The babies born last Friday were about eight weeks premature. They are healthy but will need to spend time in neonatal intensive care and will have weakened immune systems for the next few months.

— All-Star slugger Joey Gallo has worked out with the Texas Rangers for the first time during their summer camp. Gallo was cleared and at workouts Friday after missing the first week following positive tests for coronavirus. The 26-year-old outfielder said he never felt any symptoms but had two positive tests that sandwiched a negative result during intake testing. His return to the field comes two weeks before the scheduled start of the season against Colorado. He had 22 homers in 70 games and made his first All-Star appearance last year before wrist surgery ended his season.

— The Toronto Blue Jays are shifting Vladimir Guerrero Jr. across the diamond, moving the slugger to first base from third. Blue Jays Manager Charlie Montoyo said Guerrero feels comfortable at first and the team has Travis Shaw ready to play third. Montoyo also said Guerrero will see time as a designated hitter. He didn’t rule out that he will play some third in the future.

— Blue Jays infielder Travis Shaw says he’s not interested in confining himself to the hotel attached to the Rogers Centre for the summer if Major League Baseball is granted an exemption from the Canadian government to play baseball in Toronto amid the pandemic. MLB needs an exemption as anyone entering Canada for nonessential reasons must self-isolate for 14 days. The U.S.-Canada border remains closed to nonessential travel until at least July 21 and that is widely expected to be extended. Any exemption likely means the Blue Jays would not be allowed to leave the hotel attached to the Rogers Center when they play home games in the city. The Blue Jays have created a quarantine environment at Rogers Centre and the adjoining Toronto Marriott City Centre Hotel during training camp.

— The Red Sox and Blue Jays will play two exhibition games at Fenway Park before baseball’s delayed regular-season opener. Toronto will visit Boston on July 21 and 22 before heading down to Tampa Bay for its opener. The Red Sox are scheduled to open at home against the Baltimore Orioles on July 24.

The league put out Swofford’s statement Friday afternoon, saying the league has prepared “numerous scenarios” for fall competition over the last few months. The decision would come from the league’s board of directors.

Earlier this week, the ACC delayed the start of fall competition until at least Sept. 1. That move impacts non-revenue programs like soccer, volleyball, field hockey and cross country, but not football for now. The first football game involving an ACC team is North Carolina State’s trip to Louisville on Sept. 2.

In other developments related to the COVID-19 pandemic:

— The Central Intercollegiate Athletic Association, a conference of historically black colleges, is suspending all fall sports out of concern over the COVID-19 pandemic. The conference says several of its schools are in states experiencing dramatic increases in new COVID-19 cases. It says the recent rise in cases has led to a pause in phased reopening plans in many of those states, resulting in uncertainty as to whether students will return to campus this fall at several CIAA institutions. The conference said it will explore the possibility of a modified schedule for football, volleyball and men’s and women’s cross-country next spring.

— The University of Virginia says two football players have tested positive for COVID-19 and will self-isolate for at least 10 days. The school says other members of the program found to have come into close contact with them will also go into quarantine. The school tested 110 players when they began returning to campus for voluntary workouts on July 5. The players with positive test results will self-isolate for 10 days, or until they have been fever-free for at least three days, whichever is longer. Those determined to have come into close contact with those infected also will self-quarantine for 14 days.

— The University of Michigan says two athletes tested positive during a second round of COVID-19 testing, bringing the total to four out of the 375 who have been tested. The school says none of the 139 staff members have tested positive.

— The Jacksonville Jaguars are planning to play home games in front of a significantly reduced capacity this fall. Fans in attendance will be required to wear face coverings. The team released details in an email to season-ticket holders Friday. Jacksonville expects about 25% capacity at TIAA Bank Field in 2020 “in compliance with state and local authorities and following CDC social distancing guidelines.” The stadium’s capacity is listed at over 67,000. Baltimore was the first team to announced plans for reduced capacity. The Ravens plan to allow fewer than 14,000 fans at home game at M&T Bank Stadium in 2020.

— Japan’s professional baseball league opened the delayed season three weeks ago. Now fans are back, too. After playing in empty stadiums to get started, Japan began allowing up to 5,000 fans into the games on Friday, or 50% of the stadium capacity — whichever is smaller. Officials hope to allow stadiums to be filled to 50% capacity beginning on Aug. 1. Japan’s soccer J-League is also allowing fans to return, beginning on Friday, under the same guidelines. Fans are required to use hand disinfectant and have their temperatures taken when they entered the stadium. Shops were open and food and drinks were for sale, but alcohol was not allowed. Restrictions were also put on the amount of cheering permitted, a staple at games in Japan.

The 22 teams participating in the NBA restart were all at the Disney campus together for the first time Friday.

None of them, however, made it to the Orlando, Florida area with their usual travel party.

Leaving families behind for several weeks — or maybe even three months, depending on how deep a team goes in the playoffs — during a pandemic isn’t the only hardship that teams are dealing with during this restart. Space limitations within the quasi-bubble at Disney also meant that teams had to cut their official traveling parties down to 37 personnel, including players, so many people who usually travel with a club aren’t on this trip.

It’s expected that as the bubble population shrinks after six teams are eliminated from playoff contention and then eight more are ousted in the first postseason round, teams will be allowed to bring in more staff.

But until then, while teams are playing games on-site at Disney, there will be plenty of work done back in home markets and home arenas as well. Some teams left player development coaches behind, some even left assistant coaches, and all teams traveled with only one media relations staffer and one equipment manager.

DUBLIN, Ohio (AP) — Collin Morikawa looks as if he’ll be tough to catch at the Workday Charity Open. He made nine birdies Friday for a 66 and had a six-shot lead among those who finished the second round. Storms twice halted play at Muirfield Village in Ohio.

Ian Poulter had a 69 and was six shots behind. Two others had a few holes remaining when play resumed. Morikawa’s 13-under 131 was one off the Muirfield Village 36-hole record.

Morikawa ran off four straight birdies after making the turn Friday, finished with another birdie and shot 6-under 66 to build a six-shot lead when thunderstorms arrived in Ohio. His 13-under 131 was one shot off the course record set by Jason Dufner in 2017 at the Memorial.

WIMBLEDON, England (AP) — Wimbledon will pay out $12.5 million in prize money to 620 players despite the tournament’s cancellation because of the coronavirus pandemic, the All England Club said Friday.

All England Club chief executive Richard Lewis said “we are pleased that our insurance policy has allowed us to recognize the impact of the cancellation on the players.”

She died in a hospital in France, where she had been in a critical condition for days.

She last year became the first Dutch short-track skater to win a world title when she won the 500-meter title in Sofia, Bulgaria.

Herman de Haan, director of the national skating body, added: “It’s incomprehensible that she has been taken from us while in the prime of her life.”

The sisters said coaches pressured them to lose weight and overtrain, which took mental and physical tolls. They were inspired to tell their story after former teammates did the same.

In a letter posted Thursday on their respective Twitter accounts, they said: “Speaking out is something we’ve both felt we really needed to do for a long time now, but in truth, we’ve been afraid to do so.”

Both women represented Britain in the 2016 Olympic Games but they say their success has come at a high price.

Twenty-eight-year-old Becky said she was called “mentally weak” for questioning her training regimen in 2018. She then injured her ankle in “a direct consequence of the unsafe training.” Her 20-year-old sister said a nutritionist required her to send daily pictures of herself wearing just underwear to prove she wasn’t gaining weight. She was 14 years old at that time.

British Gymnastics CEO Jane Allen this week announced an independent review of claims of mistreatment. She said the British Gymnastics Integrity Unit already exists to investigate allegations and that there are welfare officers around the country.

SYRACUSE, N.Y. (AP) — Syracuse University has added an athletic director of diversity, culture and climate in a new position within the department of athletics. Salatha Willis is charged with developing and implementing new ways to create an equitable culture for the university’s student-athletes, administrators, coaches and staff in the athletic department.

The move is a response to the racial tension that has wracked the country, including a period of social unrest on campus last fall. There were more than a dozen reports last November of racist graffiti and vandalism targeting Blacks, Jews, Asians and Native Americans.

No. 2 Notre Dame, No. 25 UNC meet in ACC headliner this week 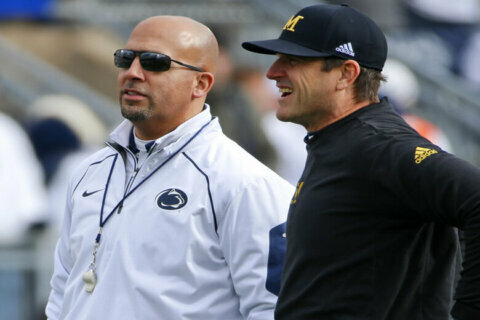 No. 22 Auburn has chance to spoil No. 1 Tide’s season again