CLEMSON, S.C. (AP) — The city surrounding Clemson University is again relaxing its open container of alcohol laws for a…

City of Clemson Police will close downtown streets at 5 p.m. and set up viewing screens as Clemson takes on LSU in the College Football Playoff national championship game.

Open containers of alcohol are prohibited by city law, but those rules will be lifted in the party area, police said,

No outside alcohol can be brought to the party, police said.

The party and the suspension of the open container law ends at midnight. In a tongue-in-cheek Facebook post, Clemson Police said they will continue to arrest anyone who destroys property or breaks other laws.

“All other laws and ordinances are in effect and no one wants to celebrate the night with a shiny pair of matching bracelets. We have new officers, their handcuffs are new, which means they haven’t been stretched out yet and aren’t as comfortable,” police wrote in their post. 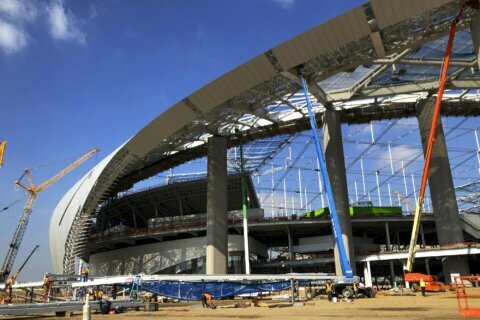 SoFi Stadium is 85% complete, on schedule for Rams, Bolts