ATLANTA (AP) — Joe Burrow threw for 349 yards and four touchdowns as the top-ranked LSU Tigers rolled to a 37-10 rout of No. 4 Georgia. He was the Tigers’ second-leading rusher with 41 yards on 11 carries, and even caught a pass on a ball that was batted down at the line and wound up in his arms, taking off for a 16-yard gain. Burrow’s busiest receivers were Justin Jefferson and Terrace Marshall Jr., who combined for 204 yards and three scores.

INDIANAPOLIS (AP) — Second-ranked Ohio State trailed 21-7 before Josh Fields threw all three of his touchdown passes in the second half of a 34-21 comeback against No. 8 Wisconsin. Fields was 19 of 31 with 299 yards and no interceptions. J.K. Dobbins ran for 172 yards and a score for the 13-0 Buckeyes, who sealed their first playoff trip in three years and ran their winning streak to 19 games.

CHARLOTTE, N.C. (AP) — Trevor Lawrence threw three of his four touchdown passes to Tee Higgins as third-ranked Clemson stormed to its 28th consecutive victory and fifth consecutive ACC title, 62-17 against No. 22 Virginia. Lawrence set an ACC title-game record for touchdown throws while going 16 of 22 for 302 yards before coming out in the third quarter. Higgins set conference championship-game records with his three touchdowns and 182 receiving yards.

ARLINGTON, Texas (AP) — Rhamondre (rah-MAHN’-dray) Stevenson scored on a 5-yard run in overtime to lead sixth-ranked Oklahoma to a 30-23 win over No. 8 Baylor. Oklahoma secured the victory by stopping the Bears with a sack and three incompletions. Jalen Hurts threw for 278 yards and a touchdown, with CeeDee Lamb grabbing eight passes for 173 yards.

UNDATED (AP) — Antonio Gibson caught a 6-yard touchdown pass from Brady White with 1:14 left as 16th-ranked Memphis defeated No. 21 Cincinnati, 29-24 in the American Athletic Conference championship game. Jaylon Henderson threw for two touchdowns and ran for another score to lead No. 19 Boise State to a 31-10 victory over Hawaii in the Mountain West championship game. Darrynton Evans scored three touchdowns and 20th-ranked Appalachian State repeated as Sun Belt Conference champions with a 45-38 victory over Louisiana-Lafayette. 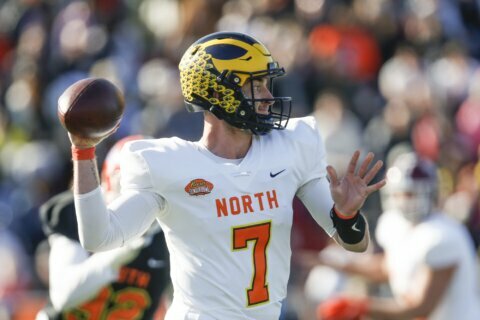