COLLEGE PARK, Md. (AP) — Ranked for the first time since 2013 and averaging 71 points per game, No. 21 Maryland is enjoying a surprisingly smooth ride in its first season under first-year coach Michael Locksley.

Though delighted with the Terrapins’ performance in a 79-0 win over Howard and a 63-20 rout of a then-ranked Syracuse squad, Locksley insisted Tuesday that Maryland has a long way to go.

“I said this to the team: It’s like driving from California to D.C.,” Locksley said. “Day 1 and Day 2, you pull up and it’s, ‘Are we happy we’re in Phoenix? Yeah, we didn’t get a flat tire, we didn’t have an accident. But it’s still only Day 2 of a 12-day journey, which means we have a lot of the trip left.”

By the tme they’re done, the Terps hope to have a full bandwagon in tow.

Maryland has been stunningly impressive. With former Virginia Tech quarterback Josh Jackson directing at attack that borrows liberally from the playbook Locksley used as offensive coordinator at Alabama, the Terrapins are averaging 636.5 yards per game and have scored 98 points in the first half alone.

To carry Locksley’s analogy further, Maryland has yet to encounter a bump in the road.

“Next stop is this week against a really good Temple program,” Locklsey said.

Ah, Temple. The Terps were 2-0 last year before the Owls pulled off a 35-14 upset to send Maryland spiraling to a 5-7 finish.

Jackson wasn’t part of that team, so revenge won’t be a factor on Saturday. His goal, after throwing seven touchdown passes in two games, is to keep the offense humming.

If he can do that, Maryland’s position in the Top 25 will take care itself.

“Being ranked this early in the season and how high you’re ranked doesn’t necessarily mean too much to you as a team,” Jackson said. “It’s very nice, but obviously we just want to get better.”

Maryland has endured four straight losing seasons, and last year the Terrapins had to endure the death of offensive lineman Jordan McNair and the suspension, rehire and subsequent firing of coach DJ Durkin.

So, sitting at No. 21 in the country is kind of a big deal. The downside is that now every knows this Maryland team is unlike recent versions.

“It just means the target is on your back and nobody is going to take you lightly,” Jackson said. “We don’t expect that from anybody on our schedule anymore.”

Many Terp fans and alumni have reached out to Locksley to pat him on the back for the job he’s done thus far in righting the program and taking Maryland to its highest ranking since November 2006.

But Locksley refuses to let himself, the players or the fans to get carried away.

“We’re happy as a team to be able to make our supporters and our fans and our students on campus feel good about our program,” he said. “It’s our job to put a product on the field that they will be excited about supporting, and there’s no doubt we’re happy about where we are from where we were.”

Notes: LB Shaq Smith (groin), who missed the Syracuse game, is expected to return Saturday. “That’s the plan,” Locksley said. … Maryland’s 142 points are tied for most in the first two games by a Big Ten team since 1936. Ohio State did it in 1996. 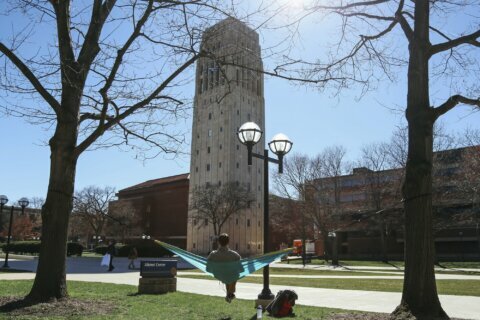