HOOVER, Ala. (AP) — Dan Mullen made a big leap in his second season at Mississippi State, but his Florida…

HOOVER, Ala. (AP) — Dan Mullen made a big leap in his second season at Mississippi State, but his Florida team doesn’t have quite so much room to grow.

Unless, of course, the Gators can jump to national contender status. That’s what another four-win improvement would mean.

The Bulldogs won five games after Mullen took over in 2009 and nine the following season. The Gators went 10-3 in his debut season and finished with a No. 7 ranking, a spot shared with Georgia.

“So if we can go from 10 to 14, that would be pretty good,” Mullen said. “This year, I would take that. I think a lot of it, I think, comes from year one to year two. I think coming in now, everyone understands the program.”

His players are more familiar with the program and coaching staff, and quarterback Feleipe Franks returns.

All that raises expectations for this season when Florida hopes to challenge defending Eastern Division champion Georgia.

Florida gets a big early test, opening the season Aug. 24 against Miami in Orlando.

The Gators finished last season with two emphatic wins. They beat Florida State 41-14 and then routed Michigan 41-15 in the Peach Bowl.

“We worked our tails off to be at that moment, on that stage, and win that game,” Franks said. “As a team, we earned to be on that stage. I think that if we keep that momentum rolling, we can have a special year again this year.”

LSU-JOHN ROBINSON: Ed Orgeron is leaning on a College Football Hall of Famer this season.

The LSU coach has brought in former USC head man John Robinson as a senior consultant.

Robinson had two stints as USC’s head coach, leading the Trojans to the 1978 national title and to five Pac-10 championships.

MISSOURI-NO EXCUSES: The Missouri Tigers aren’t looking for excuses, including a one-year bowl ban and the departure of four-year starting quarterback Drew Lock.

The latter challenge appears to have been resolved quite nicely with the addition of former Clemson quarterback Kelly Bryant to a veteran offense during the offseason.

That’s led to lofty goals for the Tigers. It’s unclear whether those goals include postseason appearances.

Missouri is currently ineligible for the postseason after receiving a one-year ban from the NCAA as part of the punishment for academic misconduct involving a tutor. The school has appealed that ruling and hopes to get a final verdict soon.

Coach Barry Odom said Monday that he looks forward to closure, but no matter the outcome, his program is focused on “having absolutely zero excuses.”

“He said we’ve still got 12 games to do what we need to do, whether (the appeal) gets approved or not,” Bryant said. “We’ll just make sure we put our best foot forward and do what we can do within those 12.”

Bryant spent four years at Clemson, where he threw for more than 3,300 yards in his career. He lost his job to Trevor Lawrence early last season and decided to transfer for his senior year.

“He’s a very selfless person, low, low ego,” Odom said. “And one of the best competitors I have ever been around.” 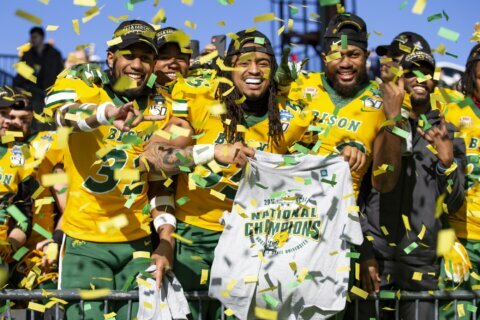