Hope on the hilltop for Howard football’s future, present

After its historic, stunning upset of UNLV, Howard has high hopes for a bright football future. But what about the present?
Listen now to WTOP News WTOP.com | Alexa | Google Home | WTOP App | 103.5 FM
(1/3) 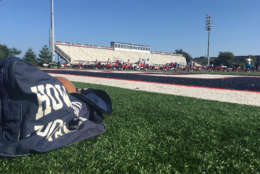 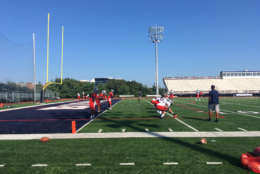 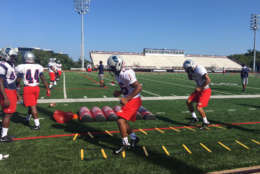 He’s looking out at his team, offense wearing white, defense in blue, bathed in the late summer sunlight of a steamy D.C. afternoon. His quarterback, the bowlegged one with the famous last name, is taking reps under center as slow jams float over the public address system at William H. Greene Stadium on the campus of Howard University.

It’s been nearly three weeks since Howard and its first-year head coach reintroduced themselves to the college football world, besting a 45-point spread, the largest ever overcome, in a season-opening, 43-40 win at UNLV. In case you haven’t been paying attention to the Bison since their upset over UNLV, they nearly toppled another FBS road foe at Kent State, before getting beaten by FCS power Richmond last week.

Now, they’re finally coming home. Three weeks can be an eternity in college football, something London knows well. And while there’s been positive energy building around the Bison’s home opener Saturday afternoon against Bethune-Cookman, he knows that for all the goodwill the UNLV win might have bought him, this is his only chance for a first impression in front of the home fans.

“The national media coverage has helped us, but we’ve got to continue to play well, to be competitive, and continue to put a plan together to win games so we can continue to ride this wave of excitement and enthusiasm,” London told WTOP.

The Bison have had just one winning season since 2004, going 7-4 in 2012. They haven’t been to a bowl since the Southern Heritage Bowl in 1996; not to the FCS playoffs since a first-round loss to Marshall in 1993. They went just 3-19 over the past two seasons, including a 76-0 embarrassment at Boston College that was so bad, officials shortened the third and fourth quarters to just 10 minutes. That may have tempered outside expectations, even for London, a coach with FBS experience and a championship at the FCS level with Richmond in 2008.

“We are a work in progress as we go through this first season together,” he said. “But there are a lot of positive things that I believe are still yet to unfold.”

Any conversation about Howard inevitably starts with that quarterback, Caylin Newton, younger brother of Cam. Listed at just 5-11, 185 pounds, Newton doesn’t possess the notorious size of his NFL MVP-winning brother. But he torched the Rebels for 330 total yards and three scores in his college debut as a true freshman under Howard’s revamped offense. He’ll continue to be the focal point of most any national story about Howard, though London has larger designs for the program that go beyond any single player, even his signal caller.

If you can distill his philosophy for his first year down to one statement, it’s this: “Anything that can be measured can be improved.”

With 18 freshmen playing, there will be growing pains, but also tremendous room for such growth. It means the team hasn’t really forged its identity yet, but Coach London likes what he’s seen so far and sees the attitude he’ll need to achieve his goals.

“I know that this team has a resilience about them,” said London. “These guys are in it, they’re focused on what’s going on. They want to get better. They want to win.”

That may seem simplistic, but consider what happened last weekend in Richmond. The Bison were beaten soundly, with the Spiders scoring the first 48 points of the game. But rather than fold, than endure another humiliation, like the one at Boston College two years ago, Howard actually outscored Richmond the rest of the way.

You can call it a moral victory. London thinks it’s something bigger than that.

“Progress is being made from changing the culture, the mindset, adopting the new guys who are coming in and helping us play right now,” said London.

Now the second half of the season begins, the one where only actual victories count, we’ll see how far the program has come and what it might be capable of this year. 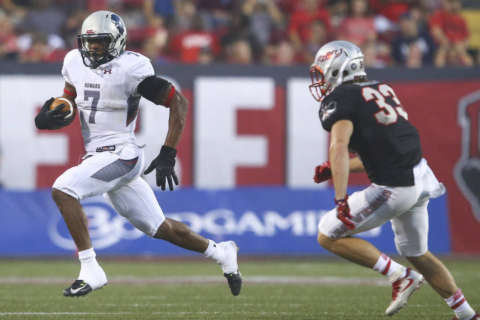 College Football Corner: How about Howard!?! 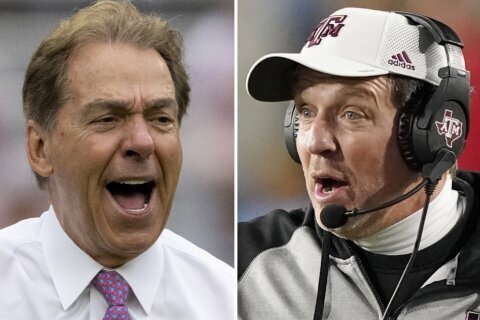 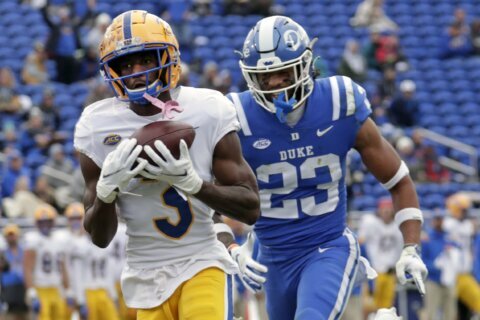