No. 3 Ohio State rebounds vs No. 14 Michigan to stay perfect

COLUMBUS, Ohio (AP) — Taylor Mikesell scored 16 points and Rikki Harris added 14 as No. 3 Ohio State won its 15th straight game, coming from behind to beat turnover-prone No. 14 Michigan 66-57 on Saturday.

Cotie McMahon had 12 for the Buckeyes (15-0, 4-0 Big Ten), who forced Michigan into a season-high 27 turnovers. Ohio State has forced at least 20 turnovers in all but two of their games this season.

Cameron Williams paced the Wolverines (12-2, 2-1) with 18 points, and Maddie Nolan and Emily Kiser each chipped in 10.

STANFORD, Calif. (AP) — Hannah Jump hit three early 3-pointers and six in all on the way to 20 points and Stanford quickly ran away from Arizona State for its eighth straight victory.

Tyi Skinner scored 20 points and junior transfer from Kentucky Treasure Hunt added 19 for Arizona State (7-6, 0-2), which shot just 4 for 20 in the opening quarter to fall behind 26-13.

The Cyclones came into the game following a 13-day layoff after beating No. 25 Villanova, 74-62. Their Dec. 22 game with Drake was cancelled because of an Iowa blizzard.

Iowa State’s fifth-year senior post Beatriz Jordao announced that she is medically retiring from basketball after dealing with a chronic leg injury.

Emma Ronsiek led the Bluejays with 22 points before fouling out midway through the fourth quarter and shortly thereafter DePaul took its final lead, 82-80, but didn’t score again. Jensen kicked off a 12-0 game-ending run with four free throws and a 3-pointer.

DePaul’s Aneesah Morrow finished with 33 points on 14-of-36 shooting with 10 rebounds for her 11th double-double this season. Kendall Holmes made 5 of 6 3-pointers for 15 points. Darrione Rogers also had 15 points, with eight assists. Anaya Peoples added 13 points.

The Jayhawks (11-1) led 58-52 after three quarters before going on a 17-5 run in the first seven minutes of the final quarter to seal it.

WACO, Texas (AP) — Caitlin Bickle scored 19 points and Baylor pulled away in the fourth quarter to beat TCU in a Big 12 Conference opener.

Sarah Andrews and Bickle scored five points apiece and the Lady Bears sank half of their 12 shots to grab a 15-8 lead after one quarter.

Unique Drake made four of five 3-pointers and added 18 points for St. John’s (4-0 Big East), which is now three shy of its longest winning streak set in the 1983-84 season. Kadaja Bailey added 12 points and Jillian Archer had nine with 17 rebounds. 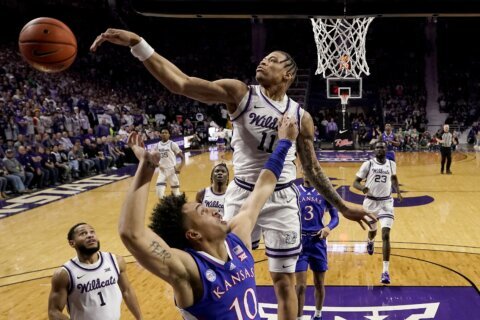