Spencer, who transferred to the Scarlet Knights (9-4) after scoring 848 points in three years at Loyola (Md.), hit 5 of 7 shots from 3-point range and added seven assists and four rebounds. He came into the game needing three points to reach the scoring milestone.

Rutgers held Coppin State’s prolific scorer Sam Sessoms to 12 points. He came into the game averaging 22.9 points per game for the Eagles (5-12) — fourth highest in the country. Sessoms was eighth in the nation with 85 assists but had only one against the Scarlet Knights. Mike Hood came off the bench to hit three 3-pointers and score 11.

Spencer and Omoruyi both had 15 points in the first half to lead Rutgers to a 51-27 lead at intermission. Spencer hit all five of his first-half 3-point tries.

The Scarlet Knights led by as many as 34 points in the second half.

Rutgers came into the game fourth in the nation holding opponents to 25.2% shooting from beyond the arc. The Scarlet Knights didn’t disappoint — holding Coppin State to 6-of-31 shooting (19.4%).

Rutgers and Coppin State played one other time — a 64-39 victory by the Scarlet Knights in 2017. 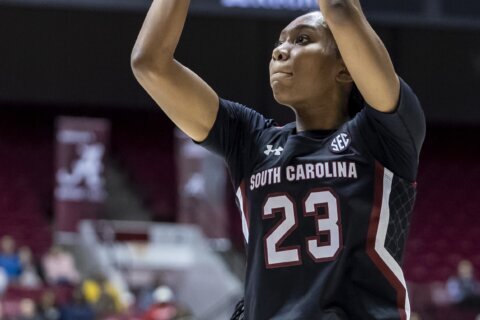