Purdue holds top spot in AP poll as UConn climbs to No. 2

Purdue maintained its grasp on No. 1 in the AP Top 25 men’s college basketball poll on Monday.

Another unbeaten is closing the gap, though.

The Boilermakers received 40 of the 60 first-place votes from a national media panel after knocking off Davidson in their only game last week, allowing them to hold the top spot for a second consecutive week. But after then-No. 2 Virginia lost to Houston, Connecticut leaped into second place and scooped up the remaining 20 first-place votes.

It’s the highest the Huskies, unranked in the preseason, have been in the AP poll since they were No. 1 on March 2, 2009.

“We just have to stick to our identity,” said UConn star Adama Sanogo, who had 27 points and 14 rebounds in a 68-48 romp at Butler on Saturday. “No pressure, just play the way I’ve been playing.”

The Cougars’ 69-61 road win over the Cavaliers, along with an earlier win over North Carolina A&T, allowed them to climb two spots to No. 3. Kansas moved up four spots after blowing out then-No. 14 Indiana at Allen Fieldhouse, while Arizona rounded out the top five after knocking off then-No. 6 Tennessee.

“For us to get a gritty ‘W’ against a team like Tennessee, it was a great night,” Wildcats coach Tommy Lloyd said.

Virginia dropped to sixth while Texas, which played its first game without suspended coach Chris Beard, remained at No. 7 following a win over Stanford. The Volunteers fell to eighth to begin a run of Southeastern Conference teams with Alabama falling to ninth after a loss to Gonzaga and Arkansas holding onto 10th for the second straight week.

The Bulldogs, who also beat Northern Illinois before their 100-90 road victory over the Crimson Tide, came in at No. 11 while UCLA climbed four spots to No. 12 after arguably the most impressive week of anyone. The Bruins won 87-60 at then-No. 20 Maryland before beating then-No. 13 Kentucky at Madison Square Garden.

“Long week,” said UCLA coach Mick Cronin, whose team has followed back-to-back losses with seven straight wins. “We know what we’re capable of if we defend and play with the toughness we played with this week.”

Baylor checked in at No. 13 ahead of Duke, the only Top 25 team that did not play last week, while Mississippi State — one of five unbeatens left in men’s Division I basketball — came in at No. 15.

Illinois began a run for the Big Ten at No. 16 with Wisconsin and Indiana right behind it. Kentucky tumbled six spots to No. 19 after its third loss in its first 10 games, while TCU rounded out the top 20 after its win over Mississippi Valley State.

Wisconsin made the biggest move in the poll, climbing five spots following its win over Lehigh. But that victory came on the heels of more impressive wins over Maryland and in overtime at Iowa the previous week to open Big Ten play.

Kentucky took the biggest fall after its 63-53 loss to the Bruins. The Wildcats’ other two losses are to Michigan State and Gonzaga, and they are just 1-3 in games played at Rupp Arena this season.

Marquette moved into the poll at No. 23 for the first time this season after beating Creighton to open Big East play, while Arizona State entered in the final slot after its own win over the Bluejays and another over San Diego.

Maryland fell out after its loss to UCLA. So did Ohio State, which lost in overtime to North Carolina in New York.

Seven different leagues fill up the first eight spots in the Top 25, though the SEC has the most teams in the poll with six this week. The Big Ten, American Athletic and Big 12 conferences have four apiece.

This story has been updated to correct Sanogo’s first name to Adama. 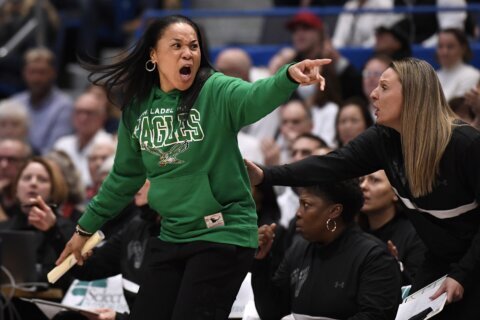