Brink delivers on both ends, Stanford rallies past Tennessee

STANFORD, Calif. (AP) — Tara VanDerveer told her Stanford team a lot would be learned by playing Tennessee in December that might help the rest of the way.

Lady Vols coach Kellie Harper reminded her group that any weaknesses at this early stage of the season would be revealed by facing the talented Cardinal.

“This is historically almost like a little bit of a bellwether game, how you do against Tennessee kind of tells you how you can do the rest of the year,” VanDerveer said. “That I think should give our team a lot of confidence.”

Cameron Brink had 21 points, a season-best 17 rebounds, six blocked shots to match her career high and a key 3-pointer before the third-quarter buzzer that gave Stanford much-needed momentum, and the second-ranked Cardinal rallied past the scrappy Lady Vols 77-70 on Sunday.

Haley Jones contributed 19 points and 12 rebounds while Hannah Jump scored 19 points and knocked down a decisive 3 with 1:15 left as Stanford (11-1) overcame long scoring lapses coming off a two-week break for final exams to win its sixth straight.

Jordan Horston had 19 points and 10 rebounds, Rickea Jackson scored 14 points while Sara Puckett added 11 with three 3s for Tennessee (7-6), which had won three straight and five of six.

“Any time you play Stanford you know exactly who you are,” Harper said. “I told our team, ‘If you’re not good at something, you’re going to find out what that is when you play Stanford.’ They do a really good job of taking away strengths.”

The Cardinal went 6 minutes, 8 seconds without a field goal in the third then Brink’s 3 to end the period put Stanford just five points down heading into the final 10 minutes. Her layup with 7:58 to play put Stanford ahead 59-58 then Jump hit from deep the next time down.

Brink grabbed seven of her rebounds and blocked two shots in the first quarter. But Stanford missed seven straight shots in the third quarter going more than four minutes without scoring as Tennessee capitalized with a 10-0 run. Brink returned to the floor with 3:37 left in the third and hit two free throws at 3:04 to end the drought.

Stanford won the fourth straight in this rivalry. The Cardinal’s lone loss this season came to No. 1 South Carolina 76-71 in overtime on Nov. 20 — then Tennessee became only the second team to reach 70 points against Stanford so far.

Tennessee committed five turnovers for its third straight game with single-digit turnovers — the first time that has happened in program history.

“I feel like that should be an emphasis just because if you’re less on turnovers our shots are going to eventually fall, so keeping those turnovers down is allowing us to get more minutes with the ball,” Puckett said.

At halftime, Stanford honored the 1992 national champion team 30 years later. The program has three national titles: 1990, 1992 and 2021. The current team had dinner with the reunion team Saturday night.

“I know they were really cheering because they really wanted us to win,” VanDerveer said.

Stanford: Brink has blocked six shots six times in her career. … The Cardinal held a 54-37 rebounding advantage. … Stanford shot 1 of 7 from deep in the first half and 5 for 20 overall. Brink, Jones and Jump combined to shoot 21 of 40. The rest of the team was 6 for 24, with Brooke Demetre missing all six of her attempts including five 3s.

Tennessee: The Lady Vols have an extended holiday break before hosting Wofford College on Dec. 27. 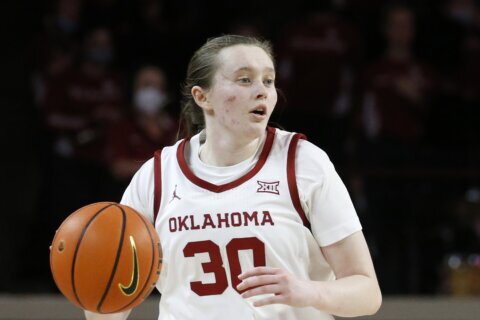