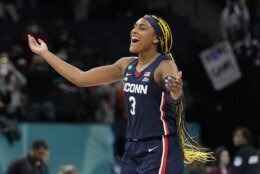 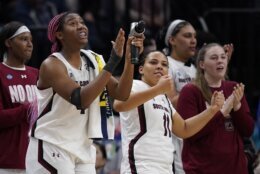 The Huskies will face South Carolina for the national championship on Sunday night.

It’s UConn’s first trip to the championship game since 2016, when the Huskies won the last of four straight championships. Since then, the team has suffered heartbreaking defeats in the national semifinals, losing twice in overtime.

UConn (30-5) will be seeking its 12th national championship, and the Huskies have never lost in an NCAA title game.

They had to work to get to the finals. Leading by 52-44 with 1:26 left, Stanford made a furious rally thanks to a few costly UConn turnovers.

MINNEAPOLIS (AP) — Aliyah Boston had 23 points and 18 rebounds to back up her AP National Player of the Year award and carry South Carolina to the NCAA championship game with a victory over Louisville.

Brea Beal matched her season high with 12 points and helped hold Cardinals star Hailey Van Lith to nine points on 4-for-11 shooting as the Gamecocks (34-2) delivered another stifling defensive performance.

Coach Dawn Staley will try to win her second national championship, eight months after the Hall of Famer led the U.S. Olympic team to a gold medal in the Tokyo Games.

Destanni Henderson scored 11 points with 3-for-6 shooting from 3-point range and had four assists for South Carolina, which improved to 13-0 this season against AP-ranked opponents.

Emily Engstler led Louisville (29-5) with 18 points and nine rebounds as the Cardinals went 1 for 8 from 3-point range and were never able to find a rhythm in the half court against the No. 1 overall seed in this tournament. The Cardinals were the only team in this Final Four without a title.