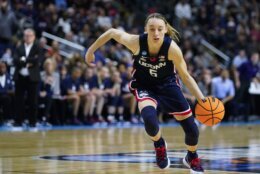 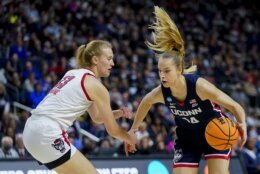 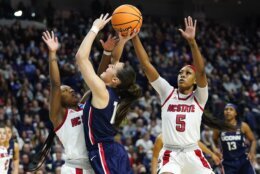 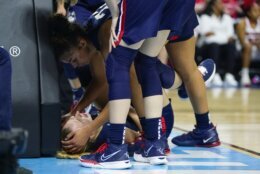 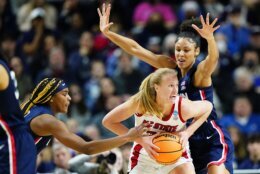 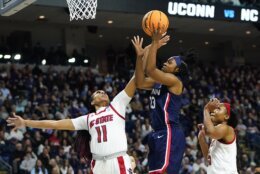 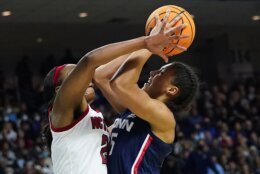 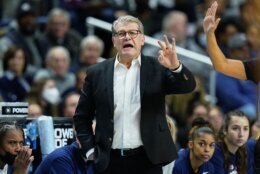 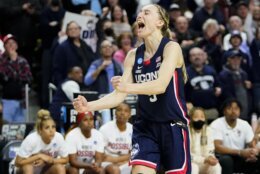 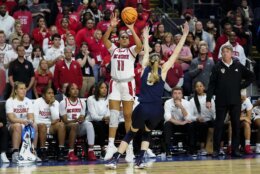 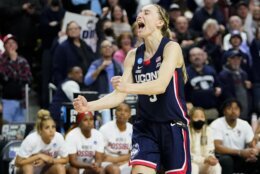 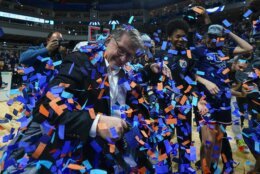 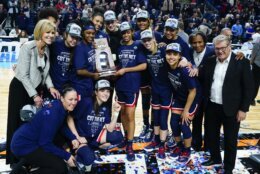 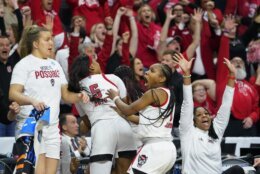 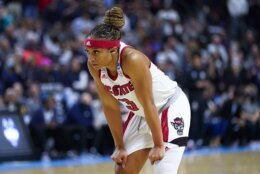 BRIDGEPORT, Conn. (AP) — In a double-overtime thriller that put UConn’s record streak of women’s Final Four appearances at serious risk, Paige Bueckers came through for the Huskies — and earned a trip home to Minneapolis.

The sensational sophomore scored 15 of her 27 points after regulation, and UConn beat North Carolina State 91-87 on Monday night to reach its 14th straight Final Four.

“Two days ago I said, ‘Win or go home,’ but we won and I’m still going home,” said Bueckers, who missed nearly three months this season with a left knee injury. “This is crazy. I’m just so excited no matter the location, no matter where it is.”

Bueckers, who grew up 10 miles outside the site of the Final Four, scored the first five points in the second overtime to lift the Huskies (29-5), who will face defending champion Stanford in the national semifinals on Friday night.

Bueckers returned last month from the knee surgery that sidelined her for 19 games, and in eight appearances before this one, she wasn’t quite the same. But against N.C. State, she looked like the player who was named AP Player of the Year in 2021. She was named the Most Outstanding Player of the NCAA Tournament’s Bridgeport Region.

“Thank God Paige came back, because she just gives everybody so much confidence and then everybody just kind of played and everybody took turns making plays,” UConn coach Geno Auriemma said. “It was just an amazing basketball game and it was a great showcase for our sport.”

Auriemma said it was one of the greatest games of his Hall of Fame career at UConn. The Huskies were ranked No. 5 in the final AP Top 25 before the tournament; the Wolfpack were No. 3, and both talented rosters shined.

“It was just amazing. … No one wants to lose,” Auriemma said. “Everyone was making big play after big play. no one backed down from the moment. It’s a shame one of us had to lose. Would be great if both of us could go.”

N.C. State was within 86-84 late in the second OT. Christyn Williams made a free throw and then a layup with 21 seconds left to give UConn an 89-85 lead.

Jakia Brown-Turner — who had forced the second overtime on a 3-pointer with 0.8 seconds left in the first extra period — then made a layup to get the Wolfpack within two, but Williams converted a layup off the inbounds to seal the win.

UConn had lost senior center Dorka Juhasz to a forearm injury earlier in the game.

“This team has been through so much and it’s only made us stronger,” Bueckers said. “And if we see one of our sisters go down, we’re going to do it for her. We all love each other, we’re all so close. It just signifies what we’ve been through all year. Whole bunch of adversity, highs and lows, ups and downs. We stayed composed and we stayed together.”

Brown-Turner finished with 20 points for N.C. State (32-4), and Elissa Cunane scored 18. Williams had 21 points for UConn and freshman Azzi Fudd had 19.

Both teams had chances to win in the final 30 seconds of regulation. UConn’s Olivia Nelson-Ododa was fouled with 28 seconds left and missed both free throws. On the ensuing possession, Diamond Johnson dribbled down the clock and drove before passing it back out to Kai Crutchfield, who was way off on a deep 3-pointer from the wing.

This was the first double-OT women’s NCAA Tournament game in the regional final or later. UConn won an overtime game for the first time in its storied tournament history; the Huskies had been 0-5 after regulation.

N.C. State was trying to reach the national semifinals for the second time in school history. The Wolfpack made it that far in 1998, beating the Huskies in the Elite Eight that season to advance. None of the current roster had been born then.

“This journey has been incredible and this team has done so much and accomplished so much,” said Cunane, a senior. “Although this is hurtful right now, proud of all we’ve done this season. I couldn’t be more proud of the team.”

Crutchfield, Raina Perez and Kayla Jones all came back this year using their extra COVID-19 season that was granted by the NCAA to try and lift the Wolfpack to new heights. They succeeded, advancing farther than the team had in 24 years.

“What a legacy they have now,” coach Wes Moore said. “Another step would have made it better.”

The Huskies dealt with injuries and COVID-19 issues all season and had their most losses since 2012, including their first conference defeat in nine years and their first loss to an unranked team since 2012.

Things have been looking up for UConn since the team started getting healthy, starting with Bueckers.

UConn suffered a major blow when Juhasz went down in the first half with a scary-looking injury just above her left wrist. She was fouled on a putback attempt and landed awkwardly when she tried to put her hands down to brace her fall.

Juhasz was on the floor in tears and was helped back to the locker room with her team up by seven points. The Huskies extended the advantage to 10 before N.C. State cut it to 34-28 at the half.

She returned to the bench at the start of the fourth quarter dressed in warmups with with her arm in a sling.

“It was one of those, you’ve seen it before on TV and it wasn’t pretty,” Auriemma said. “They had a chance to see it up close. They were pretty shook up about it. You could see it in their faces.”

UConn and Stanford have a storied history in the Final Four, having played five times in the national semifinals or championship game — most recently in 2014. UConn is 4-1, including a win in the Final Four in Minneapolis in 2005.