JD Notae scored 21 points despite missing 20 shots and fourth-seeded Arkansas made Gonzaga miserable on both ends of the floor, bouncing the top overall seed from the NCAA Tournament with a 74-68 win on Thursday night.
Listen now to WTOP News WTOP.com | Alexa | Google Home | WTOP App | 103.5 FM
(1/16) 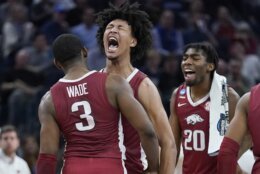 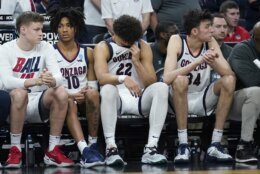 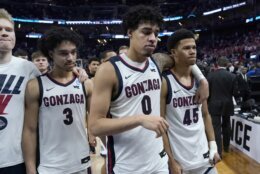 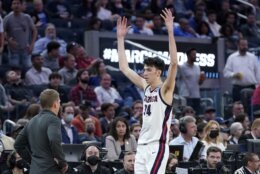 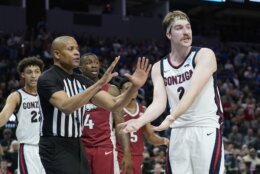 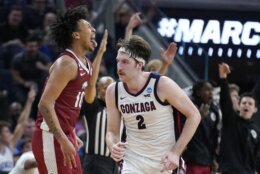 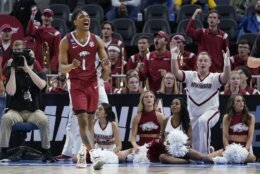 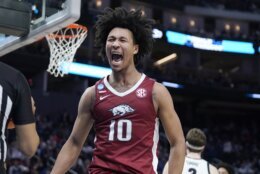 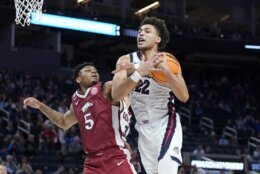 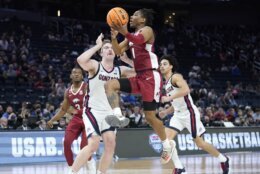 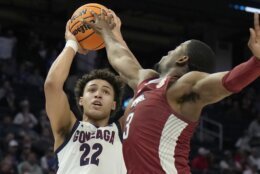 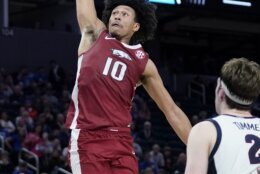 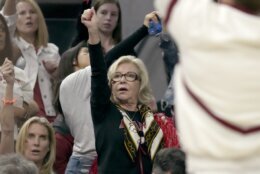 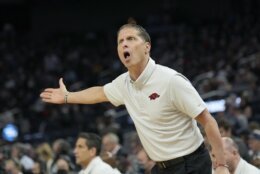 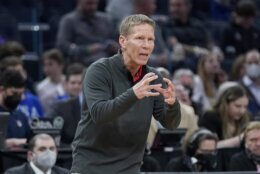 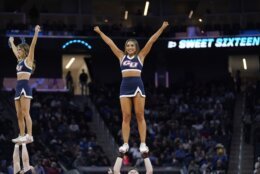 SAN FRANCISCO (AP) — For 40 frenzied minutes, JD Notae, Jaylin Williams and Arkansas played a maddening, muscular style on both ends that took Gonzaga out of its game — and right out of the NCAA Tournament far earlier than these Zags expected.

Notae scored 21 points despite missing 20 shots and the determined, fourth-seeded Razorbacks dashed the No. 1 overall seed Bulldogs’ title hopes with a 74-68 win in the Sweet 16 on Thursday night.

“We’ve been disrespected the whole year, so it’s just another thing for us,” Williams said. “We saw everything they were saying, we felt like they were dancing before the game. That was disrespect for us. We just came into the game playing hard and we had a chip on our shoulder. Every game we do.”

When the final buzzer sounded, Notae tossed the game ball into the air in triumph, while Williams flexed and roared near midcourt. Coach Eric Musselman made his way into the stands to find his mother, Kris, for a celebratory embrace after she watched her son in person for the first time coaching the Razorbacks.

After a throwback performance from the program that once promised “40 Minutes of Hell,” these Hogs relished in pure bliss.

Notae finished with six rebounds, six assists, three steals and even swatted a pair of shots for the Razorbacks (28-8), who reached the Elite Eight for a second straight year and will face second-seeded Duke on Saturday, hoping to deny retiring coach Mike Krzyzewski one last trip to the Final Four.

Drew Timme scored 25 points but couldn’t rally the normally high-scoring Bulldogs (28-4), who for the second straight season were favored to win that elusive national title but couldn’t keep up with Arkansas’ athleticism and fight. Gonzaga had been undefeated last year before losing to Baylor in the national title game.

“We just wanted to be physical, plain and simple,” Musselman said. “We wanted them to feel bodies. Obviously they played a really tough schedule early in the season, but it’s been a long time in conference play since they faced a team like us.”

An emotional Timme addressed his teammates afterward, then fought tears during a postgame news conference.

“It was a hell of a ride,” Timme said. “It didn’t end up the way we wanted but we came to play hard. It was their night.”

Arkansas continually challenged 7-foot freshman Chet Holmgren in the paint, and the lanky NBA prospect fouled out with 3:29 remaining. Holmgren scored all 11 of his points after halftime and had 14 rebounds in what might have been his final college game.

Toney converted a three-point play with 8:36 left by going right at Holmgren to draw his fourth foul and send him to the bench. The big man returned at the 6:46 mark but Notae drove at him three minutes later and drew the freshman’s fifth foul. Holmgren raised his arms in protest.

During one key sequence, Notae scored, then sneaked in from behind Timme for a steal as Williams held his ground on the block. Notae swatted an early shot and made a steal to get his team going. He hit the floor repeatedly to corral loose balls.

“He kept the momentum our way,” Trey Wade said.

Gonzaga trailed at the break for just the fifth time this season and never found the shooting touch that made the Zags the top scoring team in the nation at 87.8 points per game. The Zags shot 37.5% and went 5 of 21 from 3-point range. Andrew Nembhard was a non-factor with seven points on 2-of-11 shooting.

“It’s always so tough when it finally ends, especially short of the goal we all had,” coach Mark Few said. “First time we lost in this round in quite a while. All the credit goes to Arkansas. Their defense was tough to get any rhythm against. To me that was the difference in the game.”

Williams took a charge late in the first half — his 45th of the season — and drove through the lane for an emphatic dunk during a 9-0 run by Arkansas in which the Zags were 0 for 5 with three turnovers.

Williams had 15 points and 12 rebounds while Wade also scored 15.

Gonzaga’s last two visits to the Bay Area have been forgettable. The Bulldogs’ previous visit was still plenty fresh before Thursday — a 67-57 loss at rival Saint Mary’s on Feb. 26 for their first defeat since Dec. 4.

The Hogs earned their first ever win against a No. 1 team in the NCAA Tournament.

Arkansas had been 0-5 all-time against the nation’s top-ranked team and 2-11 overall, with one of those wins coming this season. The Razorbacks beat then-No. 1 Auburn 76-73 in overtime on Feb. 8.

Arkansas: Musselman coached both the NBA’s Golden State Warriors and Sacramento Kings in the 2000s, so this was a homecoming of sorts. His mother flew in from San Diego. … Hogs assistant Keith Smart also coached with both franchises. … Arkansas missed its initial four 3-point tries before Wade hit from deep at the 10:36 mark of the first half. … The Razorbacks lost to eventual champion Baylor in last year’s Elite Eight. … Arkansas improved to 8-5 in Sweet 16 games.

Gonzaga: The Zags committed 15 turnovers, resulting in 10 Arkansas points. … Gonzaga’s seven straight Sweet 16s is the longest active run to this round. … The Zags won the only previous meeting between the schools, 91-81 at the Maui Invitational in November 2013.