The Terrapins formally introduced Kevin Willard as their new coach Tuesday night, and the former Seton Hall coach made it clear why he was willing to go from a Big East job to this one.
Listen now to WTOP News WTOP.com | Alexa | Google Home | WTOP App | 103.5 FM
(1/5) 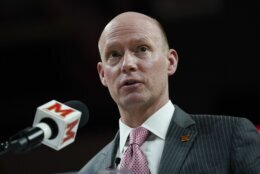 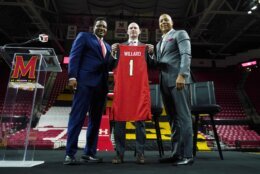 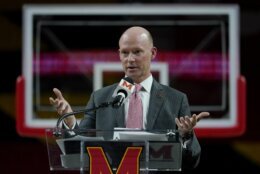 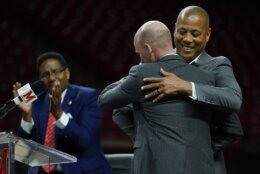 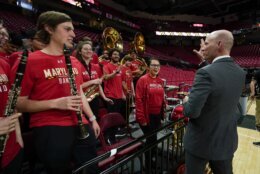 Now it’s up to him to capitalize on it.

The Terrapins formally introduced Willard as their new coach Tuesday night, and the former Seton Hall coach made it clear why he was willing to go from a Big East job to this one.

“This is a top-10 job in college basketball, hands down,” he said. “I would not have moved my family and left a place that I loved very dearly if I did not think this is a place that we should be winning national championships.”

The Terps haven’t come very close to doing that recently, but if anyone needed a reminder of what is possible, Gary Williams was in attendance when Willard spoke. It was Williams who led Maryland to a national championship 20 years ago, back when Willard was still early in his coaching career.

“They had such swagger. They had such confidence,” Willard said. “We are going to bring back that passion, that energy that coach Williams coached with, that his players played with.”

Since the end of Williams’ tenure in 2011, Maryland has made only one Sweet 16 and finished atop its conference only once, tying for the Big Ten title in 2020, the year the NCAA Tournament was called off because of the coronavirus. The Terps weren’t bad under Mark Turgeon, but they were ordinary. Turgeon departed in early December in what the school described as a mutual decision.

Willard built Seton Hall into an NCAA Tournament regular, although he never took the Pirates on a long run. So Maryland will hope that Willard is right — that this is one of the top jobs in the country, and that the coach who took Seton Hall from mediocrity to respectability can now take the Terrapins from respectability to greatness.

“We intend to position our men’s basketball program, year in and year out, to win conference titles and national championships,” athletic director Damon Evans said. “Because simply put, that is what Maryland basketball is all about.”

As if to underscore the school’s hopes for the future, Evans also announced Tuesday that $40 million has been raised for a new basketball performance center.

The Terrapins entered this past season in the Top 25 after bringing in some key transfers, but after a disappointing start and Turgeon’s abrupt exit, assistant Danny Manning took over as interim coach. Maryland finished 15-17 for its first losing season since 1993.

Willard said the time was right for him to make a move like this, and he said he was offered four other jobs, none of which measured up to Maryland.

“I have two boys that are going into ninth and 10th grade. I moved when I was in ninth grade, my brother moved when he was in 11th grade,” Willard said. “If I was going to make a move, it had to be this year, and it had to be for the right job.”

Now Willard takes over a program that’s coming off a rough season, but not one that looks like a total rebuilding project. He expects to leave his mark in ways beyond X’s and O’s.