COLUMBIA, S.C. (AP) — Zia Cooke was anxious to get back to action after No. 1 South Carolina’s first loss of the season and made sure the Gamecocks would once more find their winning ways.

Cooke had 18 points, Aliyah Boston had 16 points and 11 rebounds, and the Gamecocks bounced back from their stunning, overtime loss to unranked Missouri in an 80-68 victory over Mississippi State on Sunday night.

“I think it felt real good. I think we’ve all had a chip on our shoulder since that loss,” Cooke said. “We’re definitely hungry.”

Cooke and the Gamecocks (13-1, 1-1 Southeastern Conference) flashed that hunger much the game, taking control with an 18-8 run to close the second quarter and building their lead to 20 points in the second half.

“I think it was something we needed to keep us on the right track,” Cooke said of the loss.

South Carolina coach Dawn Staley had pointed out her team’s shortcomings several times in the season’s first two months — despite having beaten five Top-10 opponents — like too many missed shots and too many turnovers.

She didn’t see that in this one after two very focused days of practice. South Carolina hit 50% of its shots (28 of 56), its best percentage in its past seven games.

“Our stat sheet looked different than in previous games,” Staley said with a grin.

The Bulldogs (9-4, 0-1 Southeastern Conference) were a late fill in when Mississippi pulled out due to COVID-19 issues. Mississippi State was supposed to play at Kentucky on Monday, a game that also was postponed due to the virus.

Whoever stepped on the court was likely to get a strong, focused showing from South Carolina (13-1, 1-1), who were stunned in overtime, 70-69, at Missouri this past Thursday and will certainly give up the top spot its held since the preseason.

South Carolina kept up the pace in the third quarter as Cooke, a double-figures scorer who has only reached that mark in two of her previous six games, had four foul shots and a 3-pointer.

When Boston stroked a 3-pointer with 4:59 left in the period, South Carolina was up 59-39 and cruising to its fourth straight win over the Bulldogs.

South Carolina looked like it had found its rhythm late in the opening quarter with 13 straight points to lead 23-12. But the Bulldogs rallied, making seven straight shots to tie things at 27-all on JerKaila Jordan’s layup with 5:36 before halftime.

Destiny Littleton answered with a tie-breaking 3-pointer and added another long-range basket as the Gamecocks led 45-35 at the break.

Boston had her eighth double-double this season and 38th of her career.

Point guard Destanni Henderson, at 5-foot-7, had a career-high 14 rebounds, along with eight assists, for the Gamecocks.

South Carolina was without Laeticia Amihere, typically the team’s first player off the bench, who was not at the arena due to health and safety protocols.

Mississippi State: The Bulldogs are not the team that went toe-to-toe with South Carolina for the SEC title several times the previous few years. They shot just 37 percent overall and made only two of their 17 attempts from behind the arc. They were also outrebounded 45-31

South Carolina: The Gamecocks looked crisp most of the game. They’ll need it going into a gauntlet of SEC contenders, starting Thursday night at No. 19 LSU and first-year coach Kim Mulkey. That’s followed by home games against No. 20 Kentucky and No. 23 Texas A&M.

Dawn Staley coached her 700th career game since starting at Temple in 2000-01. She moved to South Carolina eight years later and is in her 14th season with the Gamecocks. Staley was adamant in her younger days she never wanted to coach. Since starting, she’s found fulfillment of guiding young people on and off the court. “700 games later, I’m still sitting here and I still really enjoy what I do,” Staley said.

South Carolina heads to No. 19 LSU on Thursday night. 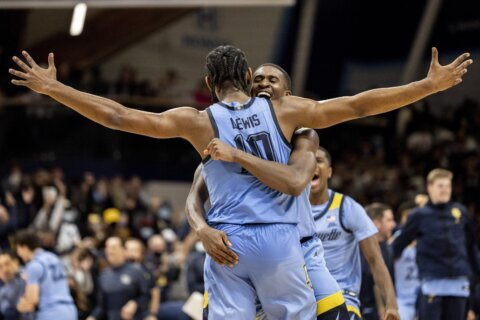