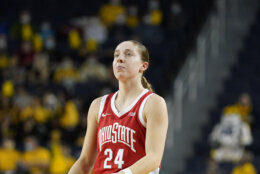 Mikesell topped her previous high of 32, set against Illinois on Jan. 6, with two free throws in the closing seconds. Mikesell, playing against her former team, was 11 of 13 from the field, including five straight makes from 3-point range, and 6 of 6 at the line. She scored 12 points in the fourth quarter while Sheldon scored 15 to reach 1,000 points for her career.

Ohio State was in control, taking an 85-74 lead with 2:13 left on a Sheldon basket, but Chloe Bibby took over for Maryland by making three straight 3-pointers to get within 87-83.

Sheldon went baseline and made a layup while being fouled but missed the free throw to keep it at 89-83. Ohio State led by two possessions the rest of the way.

Mikesell made all four of her 3-pointers in the first half and reached 16 points by halftime to help Ohio State lead 45-37.

Maryland (12-6, 4-3) entered having lost five games to teams currently ranked in the top 10. The Terps were without coach Brenda Frese, who was in Cedar Rapids, Iowa after the passing of her father. Associate head coach Karen Blair stood in her place against Ohio State.

Angel Reese led Maryland with 22 points and 11 rebounds, and Bibby finished with 20 points and seven boards. Ashley Owusu was held to 12 points on 3-of-15 shooting.

Reese beat the third-quarter buzzer by finishing a lob pass from Bibby on an inbounds play with 0.4 seconds left to get within 65-57. Bibby scored 14 points in the fourth quarter.