Leading 58-57 after three quarters, Howard took over. She scored Kentucky’s first five points in the fourth, added a 3-pointer in the middle of the quarter and scored the Wildcats’ last nine points, closing the game on a personal seven-point run, including her third three-point play.

Howard now has 1,872 points, passing Victoria Dunlap for third on the UK career list. A small crowd saw Kentucky win its 100th game in history over a ranked opponent as fans were encouraged not to attend because of hazardous road conditions due to inclement weather.

The Wildcats (8-3, 2-0 Southeastern Conference), who hadn’t played since Dec. 19 with their first two conference games postponed because of COVID, was 10 of 17 in the fourth quarter with a pair of 3s.

Dre’una Edwards had 17 points despite not scoring the the fourth quarter, and she had her string of five double-doubles snapped for Kentucky. Jada Walker added 15 points.

Georgia’s biggest lead was six points and Kentucky’s was eight as there 12 ties and nine lead changes through three quarters.

Kentucky plays top-ranked South Carolina on Sunday while Georgia faces Alabama, a day before the schools play for the football championship. 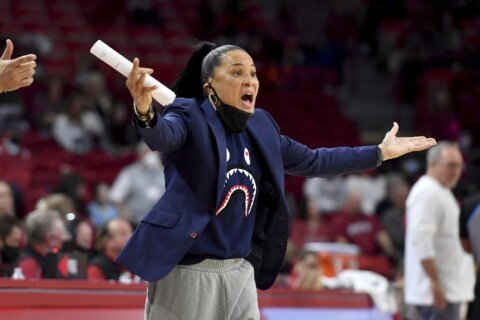