Carlton’s previous best scoring performance was 21 points while with UConn on March 7, 2019, against Temple.

“The game plan was to get it into to No. 25,” Houston coach Kelvin Sampson said. “Our kids did a great job of that.”

The Cougars had 21 assists on their 30 baskets.

Kyler Edwards, who returned after missing Sunday’s 66-61 win at Temple with a sprained ankle, had 15 points, eight assists and eight rebounds for Houston (13-2, 2-0 American Athletic Conference). Fabian White Jr. had 15 points and Jamal Shead had 13.

“The original injury is four-to-six weeks,” Edwards said. “I couldn’t leave my team that much. I’m playing on 1 1/2 right now, maybe one leg. I want to win that bad.”

“The challenge is you have to compete with courage on every single play against them,” Bulls coach Brian Gregory said. “You can’t take a play off. You can’t take a pass off because if you don’t sprint to the ball, they are going to take advantage of it.”

While Edwards was back, Houston sophomore guard Tramon Mark (left shoulder) and junior guard Marcus Sasser (left foot) are out for the remainder of the season. Mark underwent surgery on Dec. 22, while Sasser had surgery on Dec. 30. The pair averaged a combined 27.8 points per game this season.

Carlton had four in-close baskets and Edwards hit a 3-pointer as Houston opened the second half with a 13-4 run to go up 53-41 with 15 ½ minutes left.

“Josh being the player he is, dominant big man, it was just fun to watch tonight,” Edwards said.

Carlton nearly had a double-double in the first half with 18 points and eight rebounds to help Houston take a 40-37 lead at the break. The Cougars outscored USF 24-8 in the paint during the opening 20 minutes and 42-22 overall.

Greene hit two 3s as USF took an 11-2 lead four minutes into the game. Houston misfired on eight of its first nine shots.

South Florida played for the first time since a 77-57 loss to Wyoming in Hawaii on Christmas Day. The Bulls game against Mississippi Valley State on Dec. 29 was cancelled and their conference opener New Year’s Day was postponed due to COVID-19 protocols involving the opposition.

South Florida: Was seeking its first win over a ranked opponent since February 29, 2012, at Louisville.

South Florida announced a five-year extension for vice president of athletics Michael Kelly that runs through June 2028. The previous contract was set to expire in 2023. Gregory’s contract runs through the 2025-26 season. 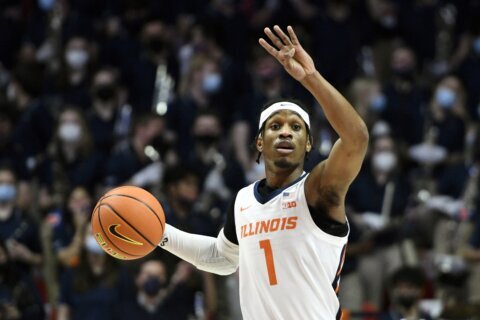