Gillespie made the play of the game when he picked off a late Syracuse pass and hit a bounce pass to a streaking Samuels for the one-handed jam down the lane and a 10-point lead that sent the crowd into a frenzy.

Texas Tech (7-1) might want to petition to play in the Jimmy V Classic every season. The unranked Red Raiders knocked off No. 1 Louisville in 2019.

Tuesday’s game was classic in title only. Want offense? You wouldn’t find it at Madison Square Garden, where the Vols (6-2) missed a whopping 34 of 40 3-pointers overall and shot only 27% overall in regulation from the floor.

David McCormack and Mitch Lightfoot added eight points apiece for the Jayhawks (7-1), who led by 21 at halftime and weren’t threatened the rest of the way.

Now, the Jayhawks turn their attention to Saturday’s showdown with Missouri. The bitter rivals haven’t played a regular-season game since the Tigers bolted for the SEC nearly a decade ago.

Kentucky (7-1) was playing for the first time in eight days. Tshiebwe ended up with 11 rebounds for his seventh double-double — the most in the nation this season.

Notae finished with 23 points and 10 rebounds as the Razorbacks (9-0) took control of the game in the first half and never let up.

The Colonels (5-5) dropped their fourth in a row. They were led by Braxton Beverly with 16 points. ___ 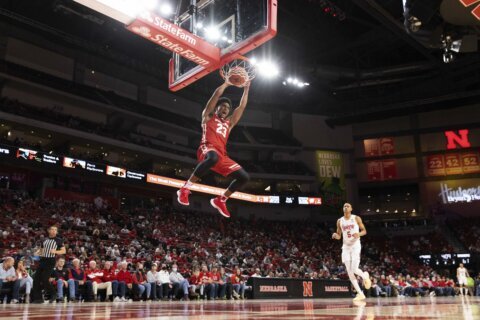