Tennessee is back in the top 10 of The Associated Press Top 25 women’s basketball poll for the first time…
Listen now to WTOP News WTOP.com | Alexa | Google Home | WTOP App | 103.5 FM

Tennessee is back in the top 10 of The Associated Press Top 25 women’s basketball poll for the first time in nearly three years.

For years, Tennessee set the standard in the poll, appearing in the first 10 spots for 212 consecutive weeks from March 10, 1997, to Dec. 18, 2008. Only UConn has a longer streak in the history of the poll; the third-ranked Huskies were ranked in the top 10 this week for the 312th consecutive time.

South Carolina remained a unanimous No. 1, garnering all 30 votes from a national media panel. N.C. State was second, breaking a tie with UConn. Stanford and Baylor rounded out the top five.

Duke, LSU and Colorado all returned to the rankings this week for the first time in a few years. The Blue Devils, who upset then-No. 9 Iowa in the Big Ten/ACC challenge, joined at No. 19. It’s the first appearance in the Top 25 under coach Kara Lawson, who took over the program last season.

The Blue Devils, who were last ranked on Nov. 1, 2018, are 8-0 this season. Duke played only four games last year before canceling the rest of the season because of COVID-19 concerns.

LSU (6-1) entered at No. 24 after beating then-No. 14 Iowa State last week. It’s the first time the Tigers are in the Top 25 under new coach Kim Mulkey, who won three NCAA titles at Baylor before returning home. The Tigers were last ranked on Dec. 2, 2019.

“It’s a positive and shows these young players, ‘Hey, we’re headed in the right direction,’” Mulkey said. “We celebrate the little things. We’ll celebrate today. I’m going to show them.”

“It means everything,” Buffaloes coach JR Payne said of getting ranked. “We’re excited to be here and want to keep climbing.”

Oregon dropped out of the poll, ending a streak of 80 consecutive weeks ranked dating to the preseason poll in 2017 that was the sixth-longest active streak. Florida State and Florida Gulf Coast also fell out.

BYU, which entered the poll last week, jumped five spots to No. 16. It’s the best ranking ever for the school. BYU will be tested at Oklahoma on Friday.

STATS OF THE WEEK

Before Duke’s win over Iowa, teams ranked in the top 10 had been 47-0 against unranked opponents. … Aliyah Boston made 22 of her 24 shots from the field this week in wins over North Carolina A&T and Kansas State, and she averaged 25 points, 15.5 rebounds and 3.5 blocks.

No. 8 Maryland at No. 1 South Carolina, Sunday. The Terrapins will be the latest challenge for the Gamecocks, who have already beaten top-five teams N.C. State and UConn this season. Maryland rebounded from a pair of losses in the Bahamas to N.C. State and Stanford with wins over Miami and Rutgers. 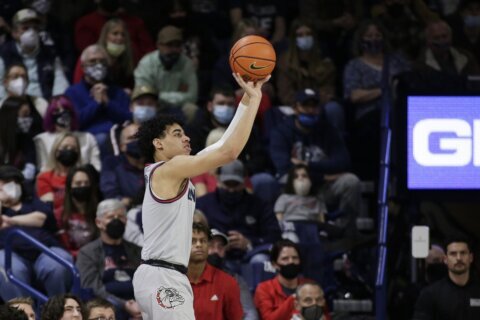