Papas scored 14 points, including four 3-pointers, in the first half. He made back-to-back 3s to take the lead for good and spark a 17-2 run that he capped with a layup and then a 3-pointer that gave the Hawks a 13-point lead midway through the first half.

Monmouth led by as many as 19 points in the second half and Reynolds made a short basket that made it 46-28 with 13:42 remaining but the Hawks went scoreless for the next nearly-6 minutes as Pitt scored the first nine points in a 20-7 run that trimmed its deficit to 53-48 when Jamarius Burton hit a 3-pointer with 3:12 to play. His basket in the lane with 28 seconds to go pulled the Panthers within three but Papas made 1 of 2 from the free-throw line to cap the scoring with 7 seconds left.

Burton scored 13 of 15 points in the second half for Pitt (3-7). John Hugley and Femi Odukale added 14 points apiece. 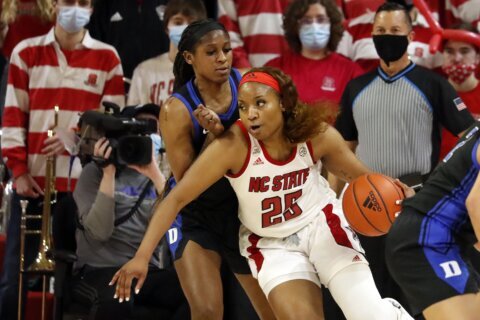