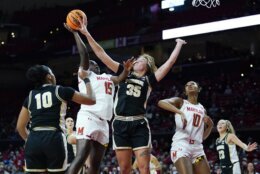 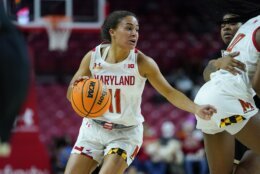 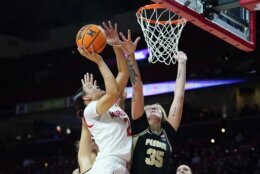 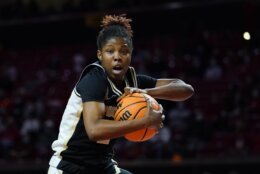 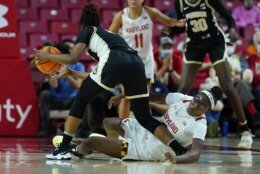 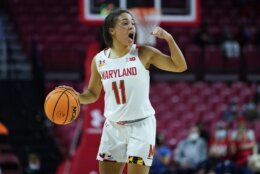 COLLEGE PARK, Md. (AP) — Ashley Owusu scored eight of her 20 points in the fourth quarter to push No. 8 Maryland to an 86-71 victory over Purdue on Wednesday night.

Owusu added nine rebounds and five assists for the Terrapins (9-2, 2-0 Big Ten), who trailed by four at halftime in their final tune-up before playing at No. 1 South Carolina on Sunday.

“We talked about it. If we play a (first) half like that, that’ll be easily a 30-point spread,” said Maryland coach Brenda Frese, referencing the game against the Gamecocks. “We came out with a great punch, but then we let them back in the game. We didn’t sustain it.”

Katie Benzan and and Angel Reese each had 15 points for Maryland, which scored 34 points off 23 Purdue turnovers in its third consecutive victory. Mimi Collins and Chloe Bibby each added 12 points.

Brooke Moore scored a season-high 22 points and hit six 3-pointers to lead the Boilermakers (6-4, 0-2), who suffered consecutive losses for the first time this season. Purdue fell to then-No. 18 Ohio State on Sunday in its Big Ten opener.

Five of Moore’s six 3s came before halftime as Purdue went 8 for 13 from beyond the arc. But the Boilermakers went cold after the break and finished 12 of 32 (37.5%).

“I thought we got great looks,” first-year coach Katie Gearlds said. “I thought maybe even in the second half we got better looks than we did in the first half. … The first half was maybe a bit of an anomaly for us.”

Cassidy Hardin added 15 points for the Boilermakers, who fell to 1-3 against ranked opposition.

Maryland opened the second half on a 7-0 run. Reese scored the first four points before the Terps took a 43-40 lead on Benzan’s 3-pointer from the right wing with 7:15 left in the third quarter.

Owusu’s driving layup made it 47-45 a few possessions later, a lead Maryland never gave back.

It grew as large as eight briefly in the third. But it was only four before a 13-2 run in the fourth, with Owusu and Collins each hitting two baskets as the Terrapins stretched their lead to 74-59.

“It was a much better job in the second half, focusing on taking care of the basketball, being able to run them off the 3-point line,” Frese said. “I thought we looked like Maryland basketball in the fourth quarter.”

Purdue: The Boilermakers finished a stretch of five straight games against teams ranked or receiving votes in the AP Top 25 with a 2-3 record.

Maryland: The Terrapins avoided their first loss to an unranked opponent since falling to Texas in the NCAA regional semifinals last March.

Maryland is unlikely to fall much in the next poll, regardless of what happens Sunday. But after consecutive losses to then-No. 5 N.C. State and then-No. 7 Baylor last month, Benzan feels the Terps have a point to prove.

“We want to show that we’re a top 10 team and we deserve to be in that conversation,” Benzan said. “And that starts on Sunday with our intensity.”

Notre Dame’s Blake Wesley making a name for himself