AMES, Iowa (AP) — Ashley Joens came up with a key blocked shot in the closing seconds and No. 15 Iowa State needed a defensive stand to hold off Northern Iowa, 70-69 Sunday night.

Emmerson Green hit a 3-pointer with 1:11 left, then followed with a three-point play with :34 to play to get Northern Iowa within one, 70-69. Iowa State’s Lexi Donarski was stripped in the backcourt by Karli Rucker and then Donarski knocked the ball away from Rucker under the UNI basket to stop the go-ahead basket but the Panthers retained possession. Kam Finley’s jumper from the lane was blocked by Joens.

Northern Iowa took a 20—17 lead after a quarter before the Cyclones went on a 17-3 run through the second quarter and took a 34-23 lead at the half, but the Panthers whittled away at the deficit the rest of he way.

Finley hit two 3-pointers and Bre Gunnels nailed a third to pull Northern Iowa within three, 57-54 with just under eight minutes left. After the Panthers cut the deficit to two with a 3-pointer by Sara McCullough with 4:55 to play, Donarski and Aubrey Jones hit back-to-back 3s and Ashley Joens knocked down a 3 following a Rucker jumper to make it 70-61 with 2:14 to play.

Finley hit 6 of 8 3-pointers and scored a season-high 28 points to lead the Panthers (6-3). Green added 15 points off the UNI bench and Grace Boffeli had 10 points and eight rebounds. 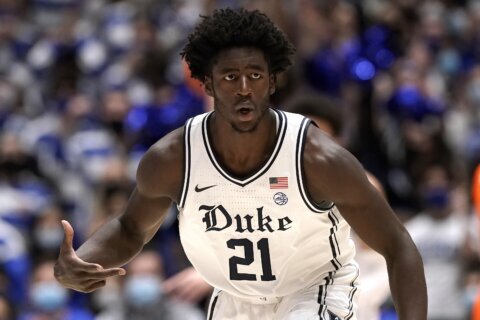