COLUMBIA, S.C. (AP) — Zia Cooke scored 20 points, including the go-ahead layup with 5:13 to play, as No. 1 South Carolina outlasted No. 8 Maryland 66-59 on Sunday for its fourth victory over a top-10 opponent this season.

Aliyah Boston added 16 points, 16 rebounds and seven blocked shots for the Gamecocks, who improved to 10-0 for the first time in six seasons.

That’s when Cooke turned things around, tying the game with a pair of foul shots. On the next possession, Cooke stole the ball from Ashley Owusu and streaked out for the layup.

The Terrapins closed within 61-59 on Angel Reese’s three-point play with 2:04 remaining, but South Carolina held them scoreless the rest of the way.

Reese had 20 points to lead the Terrapins, who sere seeking their first win over a No. 1 team since topping North Carolina in 2006.

Cunane scored nine points during an early 18-0 run that put the Wolfpack (10-1) in control.

STANFORD, Calif. (AP) — Cameron Brink scored a career-high 25 points to go with 11 rebounds and four blocked shots, and Stanford ran away from Pacific.

TUCSON, Ariz. (AP) — Freshman Madi Conner came off the bench to score a career-high 15 points and Arizona used a 10-0 run in the third quarter to put away New Mexico.

The Wildcats improved to 9-0 for the fourth time in school history and second time in three seasons.

Conner, who came in averaging 3.8 points per game, was 5 of 10 from 3-point range and paced a bench attack that produced 32 points for the Wildcats. Cate Reese had 14 points and 12 rebounds for Arizona.

Hall finished with 15 points, while Smith and Van Lith had 13 each.

Edwards and Treasure Hunt each scored 14 points for the Wildcats.

Taniyah Worth scored 13 points for Georgia State (4-5), which had no answer for Tennessee’s size.

ANN ARBOR, Mich. (AP) — Naz Hillmon scored 17 of her 25 points in the second half and Michigan beat Minnesota.

AMES, Iowa (AP) — Ashley Joens came up with a key blocked shot in the closing seconds and Iowa State held on to beat Northern Iowa.

Lexi Donarski hit 4 of 5 from 3-point range and finished with 19 points and eight rebounds to lead Iowa State (10-1).

Kam Finley hit 6 of 8 3-pointers and scored a season-high 28 points to lead the Panthers (6-3). Her potential game-winning jumper was blocked by Joens.

Kayla Wells scored 20 points to lead the Aggies (9-2), who have lost two of three.

SOUTH BEND, Ind. (AP) — Olivia Miles scored seven of her 12 points to help open the fourth quarter with an 11-0 run for Notre Dame and the Irish beat Purdue Fort Wayne.

VILLANOVA, Pa. (AP) — Maddy Siegrist scored 28 points and Villanova broke away in the second half to beat Oregon State.

Jelena Mitrovic had 14 points and 13 rebounds, and Taya Corosdale had 10 points and 11 rebounds for Oregon State (5-3).

LSU (7-1) won its sixth straight and first as a ranked team under coach Kim Mulkey. 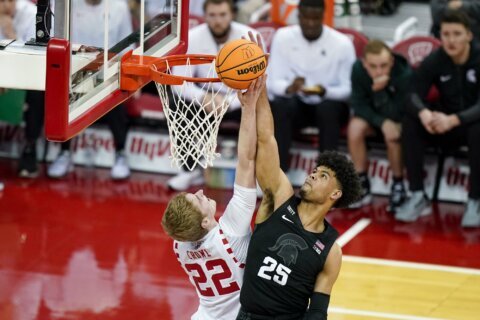 Hall scores 14 as No. 14 Michigan State tops No. 8 Wisconsin