Miami gets past Fordham 72-66 at Barclays Center

NEW YORK (AP) — Charlie Moore scored 18 points and Miami made six free throws in the closing minute to edge Fordham 72-66 at the Barclays Center on Sunday.

Isaiah Wong added 17 points and Kameron McGusty 15 for the Hurricanes (8-3), who chose to play at the home of the New York Nets because the Atlantic Coast Conference tournament will be there in March.

McGusty had a critical three-point play with 1:46 to go after Fordham’s Kam’ron Cunningham hit a pair of 3-pointers to cut a 10-point Miami lead to 63-59.

It was 66-61 heading into the final minute but McGusty, Jordan Miller and Moore were clutch at the line, where the ‘Canes finished 15 of 19, 10 of 11 in the second half.

Ohams scored inside to start the second half but the Hurricanes reeled off 16 straight points. Wong had a 3-pointer and a 3-point play and Moore contributed back-to-back baskets.

After a pair of Fordham free throws Miami scored four more pops, taking a 55-51 lead on on Wooga Poplar’s layup at the 11:52 mark. Fordham got eight straight as Josh Colon-Navarro cashed on after being fouled on a 3-point attempt and then Antrell Charlton hit a 3 and a jumper. 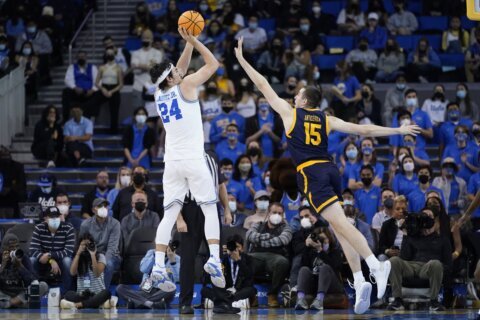