The Buckeyes (8-2) outscored the Badgers by 13 points in the second half, running away with the game after leading by five points at halftime.

Zed Key finished with 11 points and Meechie Johnson Jr. scored eight, including a pair of 3-pointers in the second half. Kyle Young hauled in a career-high 14 rebounds.

Johnny Davis led the Badgers with 24 points and Brad Davison added 13. The loss halted Wisconsin (8-2) at six consecutive victories as they produced a season-low scoring output.

Ohio State outmatched Wisconsin on the glass, grabbing a season-high 49 rebounds to the Badgers’ 28.

The Badgers led by as many as eight points in the first half, but a 12-point run midway through the half helped Ohio State regain the lead for good with 8:26 left. The Buckeyes shot 58% in the first half.

The win improved Ohio State’s home record to a 7-0 and marked the first time the Buckeyes defeated Wisconsin in Columbus since the 2016-17 season. The Buckeyes also extended their winning streak to four games.

Wisconsin: Shooting woes plagued the Badgers for the second straight game. Wisconsin wasn’t so fortunate on Saturday after defeating Indiana on Wednesday on 35.5% shooting, making buckets at a 34% clip against the Buckeyes.

Ohio State: Turnovers remained an issue for the Buckeyes. They allowed 14 giveaways to Wisconsin, including 10 in the first half. 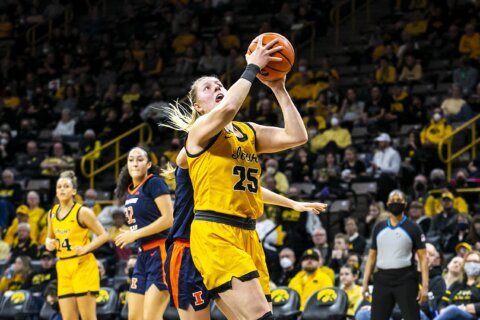