Jayden Gardner scored 15 points, including a last-second putback of a missed 3-pointer that bounced home, lifting Virginia to a 57-56 win over Pitt in the Atlantic Coast Conference opener for both teams on Friday night.
Listen now to WTOP News WTOP.com | Alexa | Google Home | WTOP App | 103.5 FM
(1/9) 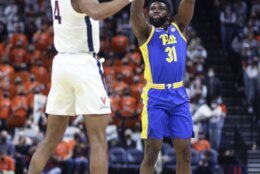 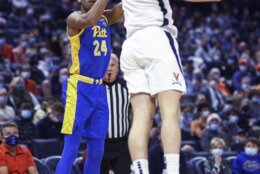 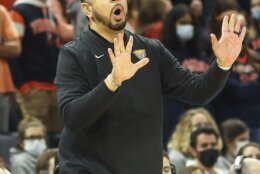 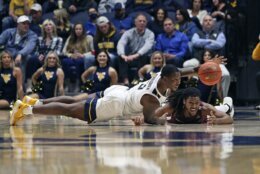 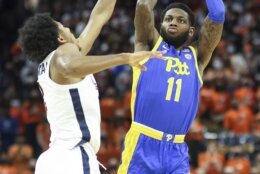 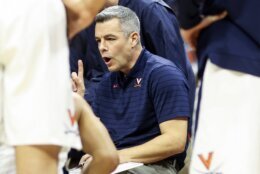 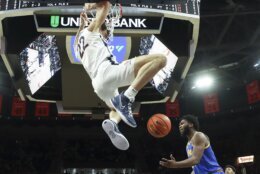 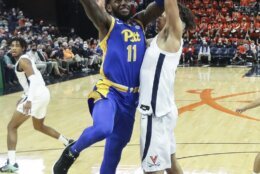 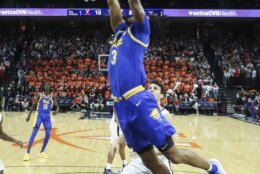 CHARLOTTESVILLE, Va. (AP) — Jayden Gardner scored 15 points, including a last-second putback of a missed 3-pointer that bounced home, lifting Virginia to a 57-56 win over Pitt in the Atlantic Coast Conference opener for both teams on Friday night.

In a game that saw four ties and 14 lead changes, Gardner scored the last five of the game as Virginia’s (6-3, 1-0) streak of winning ACC openers stretched to 14 — 13 in a row for coach Tony Bennett.

The Panthers scored 11 unanswered points to swing from seven points down to a 56-52 lead with 25 seconds left.

That’s when Gardner converted a three-point play with 9.7 seconds on the clock, pulling the Cavaliers to within 56-55. Pitt turned the ball over on a five-second violation to give Virginia a final possession.

Taine Murray missed from 3, but Gardner collared the rebound and hit a step-back jumper along the baseline that bounced three times around the iron before falling through with nine-tenths of a second left for the win.

Armaan Franklin added 10 points for Virginia but was 0 for 6 from distance as the Cavaliers made just 4 of 21 from beyond the arc.

Pitt was playing without starting guard Femi Odukale (ankle) and had already lost Nike Sibande to a season-ending knee injury.

John Hugley led the Panthers with 12 points on 2-for-11 shooting and Jamarius Burton added 11 with four assists. The Panthers were 18-of-46 shooting overall but made 8 of 16 3-pointers, one of their best games from distance this season.

Mouhamadou Gueye and Onyebuchi Ezeakudo each hit 3s in Pitt’s late run for the lead.