ST. LOUIS (AP) — Yuri Collins set a school record with 19 assists — the most in an NCAA game this season — to go with 14 points and Saint Louis beat Boston College 79-68 on Saturday.

Collins broke the Saint Louis assists record set by Jim Roder versus Southern Miss during the 1986-87 season. He was 5-of-5 shooting as the sophomore collected his second career double-double.

Collins’ final assist came on a length-of-the-court pass to Francis Okoro for a game-ending dunk.

The Billikens led by as many as 23 points after a Jimerson 3-pointer with 13 minutes remaining. The lead remained in double figures until Boston College scored nine points in less than a minute to get within seven with 17 seconds left before two Jimerson free throws and Okoro’s dunk.

Makai Ashton-Langford scored 18 points, DeMarr Langford Jr. 14 and Jaeden Zackery 12 for the Eagles (6-4), who had a three-game win streak snapped. After a 19-point first half, the Eagles rebounded to shoot 53% in the second half but ended just 3 of 17 from the arc.

The Billikens’ 79 points are the most given up by Boston College this season, which came in with a 59.8 points per game defensive average. 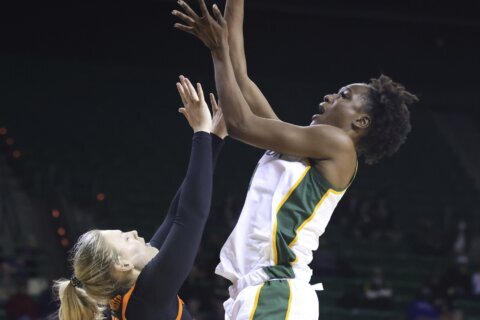