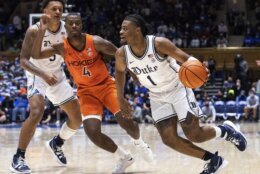 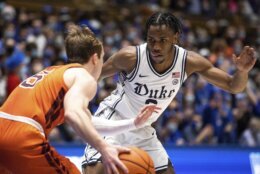 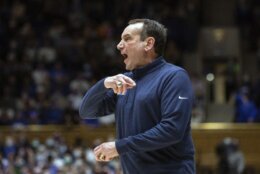 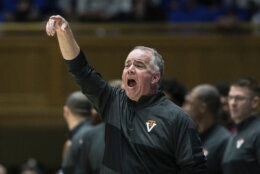 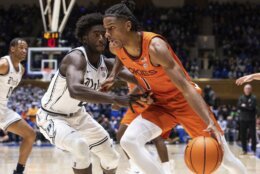 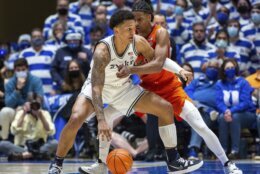 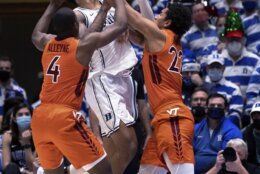 After struggling to break loose against Virginia Tech, the second-ranked Blue Devils were showing off their edge behind Griffin, fellow freshman Paolo Banchero and a smaller-ball lineup that powered a second-half burst.

Banchero had 23 points and Duke shot 62% after halftime to beat Virginia Tech 76-65 on Wednesday night, erasing an eight-point deficit early in the second half to win its Atlantic Coast Conference opener.

Banchero scored 17 points in his dominant second half, fueled by the move to a perimeter-heavy lineup around the versatile 6-foot-10 star freshman. The move changed the flow of the game, both in Duke’s ability to defend ball switches and to get out in transition while slowing Keve Aluma after his big first-half performance.

And Banchero was the toughest of all.

“He’s that talented. I mean, he’s that good,” Hokies coach Mike Young said. “We tried to go with Aluma, we tried to go with (Justyn) Mutts. Those two kids are hard-nosed and know what they’re looking at, they’ve played a number of really good players. Paolo was better.”

Banchero sparked the go-ahead push from a 42-36 deficit, scoring on a drive, then sticking back his own miss and draining a step-back 3-pointer — all against Aluma. He followed that by getting airborne and then zipping a pass to a cutting Trevor Keels for a layup and a 43-42 lead at the 14:31 mark.

The margin grew from there, with Banchero scoring on an up-and-under move against Aluma and then putting in his own miss to cap a 27-7 run that pushed Duke to a 63-49 advantage with 7:35 to go.

It was a dominant stretch from Duke’s star freshman, who had been thoroughly outplayed by Aluma, a 6-9 redshirt senior, in the opening half.

“I wanted to come out and have a strong second half, get to the basket more, establish myself inside,” Banchero said. “Yeah, I still feel like I missed a lot of chippies and stuff like that. Definitely could’ve played a lot better, but I definitely picked it up in the second half.”

Aluma had 17 points before halftime to help Virginia Tech (8-5, 0-2) lead 36-32 at the break, but things were tougher the rest of the way as he finished with 25 points to go with 10 rebounds. Mutts added 20 points for the Hokies.

Virginia Tech: The Hokies had split their last four games, including a loss to Wake Forest in their conference opener. Young’s team played with composure throughout the opening half and early in the second, but never managed to counter Duke once the Blue Devils got rolling downhill. Virginia Tech, which joined the ACC for the 2004-05 season, has still won only once (January 2007) at the Blue Devils’ famously hostile Cameron Indoor Stadium.

“The determination that, for about a five-minute period, of us going to the basket — there were no plays called,” Krzyzewski said. “Our guys were just really strong. … So we grew up a lot in that second half.”

Virginia Tech thrice closed within seven in the final 5 1/2 minutes, and had a terrific opportunity to draw even closer when Aluma got a wide-open corner 3 down 72-65. But he couldn’t connect, and then Keels followed with two free throws and a transition layup off a steal to all but seal this one.

“Felt good about it,” Young said. “Looked good. Just didn’t get it down.”