LAS VEGAS (AP) — No. 12 Houston scored the first 17 points against Butler in the quarterfinals of the Maui Invitational on Monday, and then allowed Wisconsin to score the first 13 points en route to a 20-point halftime deficit in Tuesday’s semifinal.

It cost the Cougars in the long run, as Johnny Davis scored a career-high 30 points to lead Wisconsin past Houston 65-63.

The Cougars cut Wisconsin’s lead to two on Kyler Edwards’ 3-pointer with 40 seconds left. With the final possession, Jamal Shead drove baseline and passed to Edwards, who wasn’t expecting the feed, costing the Cougars a chance at a final attempt.

“Looking back, I’m kind of glad this did happened so we can learn how to finish a game down the stretch,” Wisconsin coach Greg Gard said. “I think it was just a great experience for these guys.”

Tyler Wahl chipped in with nine points and seven rebounds, while Brad Davison also had nine points for the Badgers (4-1).

Sasser had a chance to tie it with 47 seconds left, but his attempt clanked off the rim to Davis, who was fouled immediately and drained two free throws to push Wisconsin’s lead back to five, 65-60.

Davis sparked the Badgers early, scoring 11 of their first 16 points. The savvy sophomore was red hot from long range inside the first six minutes of the game, draining three 3-pointers to spark a 16-4 run.

“We did a really good job of sharing the ball,” Davis said. “We really needed to come out fast, especially against these guys. They’re one of those teams where if you get down they’ll just bury you.”

Houston, which averages 23 points off turnovers, had just two in the first half as it failed to create pressure on the Badgers to disrupt their offense.

Wisconsin’s offense helped their defense by shooting better than 60% early in the game and forcing Houston to take the ball from the net and out on the baseline, rather than moving in transition, something the defensively minded Cougars generally thrive on.

Instead, it was Wisconsin doing a good job in taking away Houston’s main offensive threat by shutting down Sasser, who is averaging 20 points per game. He had three points and four turnovers in the first 20 minutes.

Wisconsin, which has led the Big Ten in scoring defense under Gard four of the last six years, came into the game allowing a Big Ten-best 53.8 points per game, which ranks 14th in the nation. The Badgers held Houston to its lowest offensive output of the season. The Cougars scored 63 or fewer just five times last season, going 3-2 in those games.

After going 4 of 5 from the free-throw line in the first half, the Cougars were just 4 of 10 in the second half, missing 6 of 7 during one stretch. Wisconsin, meanwhile, made 10 of 11 from the charity stripe in the second half and finished 12 of 15 for the game.

Wisconsin: The Badgers have become accustomed to the non-conference November tournament grind, having competed in one in 14 of the last 16 years. With Tuesday’s win, the Badgers are 25-12 (.667) in those games. Wisconsin is now 7-4 all-time in the Maui Invitational

Houston: Tramon Mark, who was expected to be a starter this season, has contributed nicely in his first two games back after recovering from a left shoulder injury. He continued to provide a spark off the bench for the Cougars. After averaging 7.8 points per game last season, the sophomore guard is averaging 6.5 after the first two games of the Maui Invitational.

Houston: Will play Oregon for third place in the Maui Invitational on Wednesday.

This story has been corrected to show that Wisconsin’s coach’s first name is Greg, not Gary, Gard. 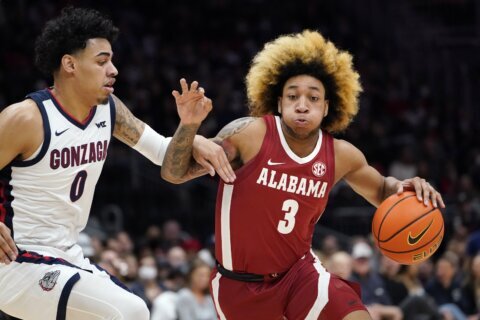