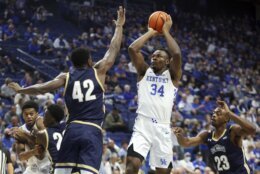 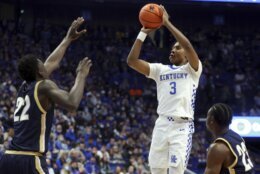 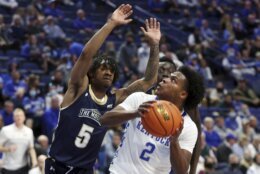 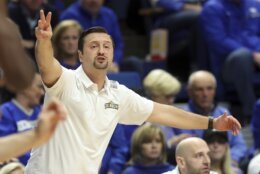 LEXINGTON, Ky. (AP) — Oscar Tshiebwe had a career-high 24 points with 16 rebounds, TyTy Washington scored 16 points and No. 13 Kentucky shot well for the second consecutive game to run away from Mount St. Mary’s 80-55 on Tuesday night.

Tshiebwe helped set the tone with contributions on both ends on the way to his third double-double to start the season. The West Virginia transfer continued his strong rebounding, and he also made short and mid-range jumpers to finish 11 of 14 from the field and top his previous best of 21 points against Boston University on Nov. 22, 2019.

Washington shot 7 of 12 with a couple of 3-pointers. Keion Brooks Jr. contributed 10 points and seven rebounds to help the Wildcats win the boards 41-27 and dominate the paint 46-16.

Josh Reaves and Jalen Benjamin scored 11 points each for Mount St. Mary’s (1-3), which shot 34% and lost its second consecutive game.

Mount St. Mary’s: The Mountaineers went back and forth with Kentucky early on but steadily fell off the pace and were quickly left behind just seven minutes into the second half.

Kentucky: The Wildcats followed almost the same pattern as against Robert Morris, sorting things out before erupting. Tshiebwe showed a lot of confidence in his jumper and proved he can also score away from the basket.