BIG MEN ON CAMPUS: Juniors Boogie Ellis and Isaiah Mobley have led the Trojans. Ellis has averaged 17 points, four rebounds and four assists while Mobley has put up 12.8 points and eight rebounds per game. The Hawks have been anchored by Jordan Hall and Taylor Funk, who are averaging 15.5 and 18.5 points, respectively.

FACILITATING THE OFFENSE: Hall has either made or assisted on 40 percent of all Saint Joseph’s field goals over the last three games. The sophomore guard has accounted for 19 field goals and 13 assists in those games.

ASSIST RATIOS: The Trojans have recently created buckets via assists more often than the Hawks. Saint Joseph’s has an assist on 40 of 80 field goals (50 percent) over its past three contests while Southern California has assists on 63 of 97 field goals (64.9 percent) during its past three games.

DID YOU KNOW: The Southern California offense has recorded a turnover on only 13 percent of its possessions, which is the eighth-best rate in the nation. The Saint Joseph’s defense has forced opposing teams to turn the ball over on just 15 percent of all possessions (ranked 340th among Division I teams). 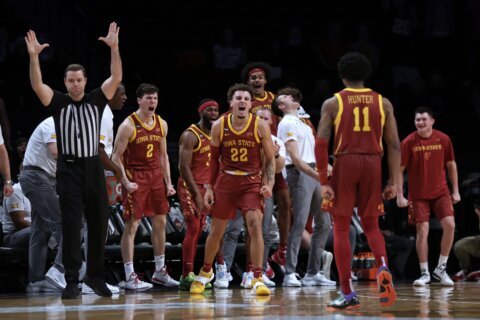 Kalscheur leads Iowa State to 78-59 rout of No. 9 Memphis